DOUALA - Islam is one of the fastest growing religions in the world, and Cameroon is no exception. 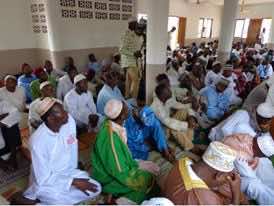 DOUALA – Islam is one of the fastest growing religions in the world, and Cameroon is no exception.

In the coastal city of Douala, Cameroon’s economic capital, local Muslims build a new mosque at least every two years to accommodate with the growing number of believers.

“The expansion of existing mosques and building of new mosques clearly shows that Islam is growing very fast in Douala and Cameroon in general,” Sheikh Mohamed Malik Farouk, the chief imam of Douala, told Andolu Agency in an exclusive interview.

“Alhamdulillah [thank God] we have now many mosques for Friday prayers in Douala and this is a sign of the growth of Islam,” he added.

The Muslim religious leader said although Islam was first introduced in Cameroon in the 1800’s, it only came to Douala in 1922 after Muslims from northern Cameroon and foreign traders came to the coastal city.

“The first big mosque was built in 1922,” recalled Sheikh Farouk, adding that the number has increased significantly over the years.

“In Douala alone we have over 90 mosques and about 500,000 Muslims out of the 3 million population of the city.”

On Friday, a special ceremony was organized in Malaape Mosque to inaugurate Sheikh Ahmed Babikir as a new imam.

The colorful occasion was attend by over 20 members of the Muslim traditional association who represent several tribes in the region.

The traditional elders dressed Babikir in Muslim headgear as a sign of his installation as an imam.

He was also given a copy of the holy Quran to use for guidance in conducting his daily activities.

According to the CIA Factbook, Muslims constitute about 20 percent of Cameroon’s total population of 20.5 million.

Most of them live in northern Cameroon and hail from major tribes such as the Fulani and the Peuhl.

Muslims in Cameroon are mostly engaged in trade and own large businesses in the African country.

Unlike in other African countries, the Cameroonian Constitution provides for freedom of religion and the government generally respects this right in practice.

The chief imam of Douala boasts that whenever they ask the local community to help build a Muslim school or mosque Muslims always donate generously.

Like the followers of other faiths, Cameroonian Muslims run schools, hospitals and other community uplifting projects.

Sheikh Farouk said many Cameroonians were also embracing Islam because of the exemplary behavior exhibited by local Muslims.

“Muslims here conduct themselves morally well. They treat their non-Muslim neighbors with respect,” he asserted.

“They also don’t engage in any immorally activities, which has attracted many non-Muslims to our faith,” added the local religious leader.

“Many people who want to live a clean life from drugs, alcohol and casual sex, which could lead to HIV, are rushing to join the faith.”

Sheikh Farouk asserted that Muslims in Cameroon live peacefully with their non-Muslims compatriots.

“Despite our huge population, we have never had a religious conflict with any community in Cameroon,” he noted.

In Cameroon, mosques and churches are often located near each other in a sign of religious tolerance.

“We tell our believers to treat their non-Muslim neighbors with respect and that’s the example the people of Central African Republic need to emulate.”