Casablanca - The coalition of NGO’s called “Printemps de la Dignité” (Spring of Dignity) organized Saturday in Rabat a “white march” against all sorts of violence against women, under the title “Until it stops.” 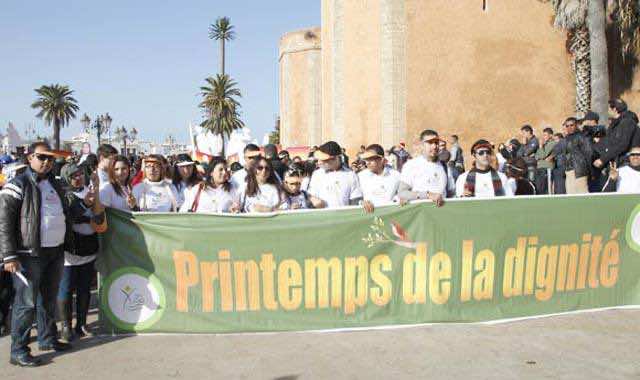 By
youssef sourgo
-
Youssef Sourgo is currently a Master’s student in Linguistic and Literary studies at Ain Chok Faculty of Letters and Humanities.
Dec 15, 2013
Spread the love

Casablanca – The coalition of NGO’s called “Printemps de la Dignité” (Spring of Dignity) organized Saturday in Rabat a “white march” against all sorts of violence against women, under the title “Until it stops.”

According to the organizers, people from all walks of life marched to “celebrate the memory of all women who deceased as victims of violence.”

The march also sought to raise awareness on the potential dangers of the draft law suggested by the Minister of Women and solidarity, Bassima Hakkaoui, to combat violence against women.

Mrs. Bikarden added, “This draft law does not live up to the expectations of the Moroccan society in combating violence against women.”

Some of the demands voiced during the march were “the abolition of child marriage,” “the punishment of any person who exerts any sort of violence against women” and “the establishment of an efficient law that protects women and children from sexual harassment and rape.”

The event was also marked by the exposition of artistic works relevant to the cause of the march.

The march culminated with a meeting between the victims’ families, representatives of the Spring of Dignity Coalition and female MPs to discuss the coalition’s perspective on the draft law dealing with violence against women.

Last November 25, Amnesty International’s chapter in Morocco, commemorated the international day for the elimination of violence against women.

The same day, Amnesty members and supporters organized a protest before the Moroccan parliament in Rabat to condemn all types of violence and discrimination against Moroccan women.

The protest came as part of an international campaign called, “The 16 Days of Activism against gender violence.”

It is also noteworthy that nearly 827,000 Moroccan women, aged between 18 and 64 years old, have suffered sexual abuse at a certain point in their lives.