Seoul- Young North Korean leader Kim Jong-Un spent a whirlwind weekend making public appearances around the country which analysts said were intended to demonstrate his firm grip on power following the shock execution of his uncle. 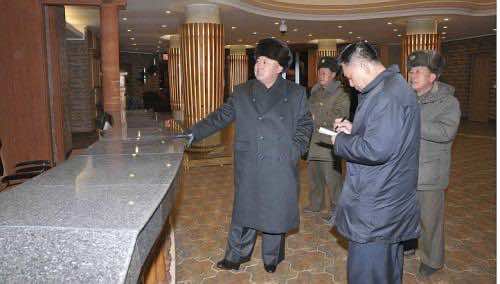 Seoul- Young North Korean leader Kim Jong-Un spent a whirlwind weekend making public appearances around the country which analysts said were intended to demonstrate his firm grip on power following the shock execution of his uncle.

In an unusual flurry of visits, since Saturday the official Korean Central News Agency has reported on Kim’s “field guidance” trips to a military design centre, a luxury ski resort and a military fish warehouse as well as attending the wake for a late senior party official.

Photos of his latest trip to the fish warehouse reported on Monday showed Kim smiling while walking with top military officials who accompanied him.

He “couldn’t hold back joy or stop smiling” after being told fish production had grown dramatically this year, KCNA said, adding he had sent a handwritten thank you letter to the manager of the facility.

“(Kim) smiled radiantly looking at the warehouse packed with stacks of fish, saying it looked like an ammunition depot full of artillery,” it said.

Kim was reported on Sunday to have visited the Masik Pass Ski Resort under construction in the northeast to check progress on his famed pet project.

Jang, who married a powerful sister of late leader Kim Jong-Il, was accused of plotting a coup and embezzling state funds, among other charges.

The purge — carried out in an extraordinarily dramatic and brutal fashion — marked the biggest political upheaval since Kim Jong-Un, aged around 30, took power after the death of his father two years ago.

Jang was seen as playing a key role in bolstering the leadership of the young and inexperienced Kim in the isolated communist state.

But the 67-year-old’s growing political influence and power was increasingly resented by the leader, analysts said.

“I think Kim is trying to boast that he’s fully in control of the regime and reassure the North’s public that the regime is stable even after Jang’s death,” said Shin In-Kyun, head of the Korea Defense Network think tank.

Kim Yong-Hyun, a North Korea scholar at Seoul’s Dongkuk University, said the young ruler was also seeking to portray himself as a confident leader whose power was unaffected by the recent turmoil.

“He’s trying to showcase to the world that he is leading the country well, despite concerns of the international community,” said Kim Yong-Hyun, a North Korea scholar at Seoul’s Dongkuk University.