NEW YORK- Oil prices jumped on Monday after armed protesters in Libya refused to lift a months-long blockade of key oil terminals in the eastern part of the country. 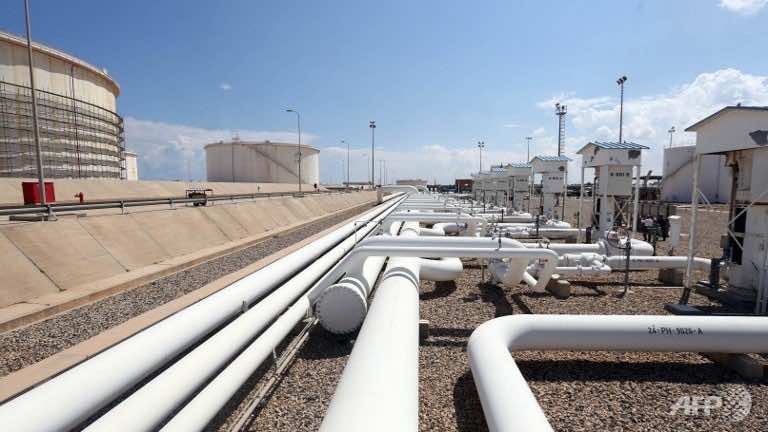 NEW YORK- Oil prices jumped on Monday after armed protesters in Libya refused to lift a months-long blockade of key oil terminals in the eastern part of the country.

US benchmark West Texas Intermediate for January delivery gained 88 cents to $97.48 a barrel on the New York Mercantile Exchange.

European benchmark Brent oil for January delivery jumped $1.64 to $110.47 a barrel in London.

“The big story is about Libyan oil production remaining off the market,” said Andy Lipow, president of Lipow Oil Associates. “That is definitely supporting both Brent and WTI prices.”

Ibrahim Jodhrane, head of the security guards blockading terminals in Eastern Libya, Sunday told broadcaster Al-Nabaa that the government had not met conditions to lift the blockade.

In July, the Al-Magharba tribe launched a blockade of terminals in Zueitina, Ras Lanouf and Al-Sedra. The blockade is linked to an effort to win oil revenues and political autonomy for Cyrenaica, the oil-rich eastern part of the country.

Last week, the group said they expected to reopen the terminals on Sunday.

However, the latest failed negotiations “only reinforces our view that Libyan production will struggle to exceed 800,000 barrels a day in 2014,” said a Morgan Stanley report.

“Resolving deep disagreements will likely require material changes at the federal level, and threats by the government to use force only risk exacerbating the situation.”

Libya in October pumped 0.45 million barrels of oil a day, well below its 1.4 million barrel capacity, according to the International Energy Agency.

Also on Monday, the US Energy Information Administration projected the US would in 2016 reach 9.5 million barrels a day, near an all-time record. The forecast is the latest to underscore the growing US shale boom.

Lipow said the latest EIA report did not affect prices.

But the EIA forecast “is contributing to the debate of increasing oil production in the US and whether we are going to export crude in the future,” he said.