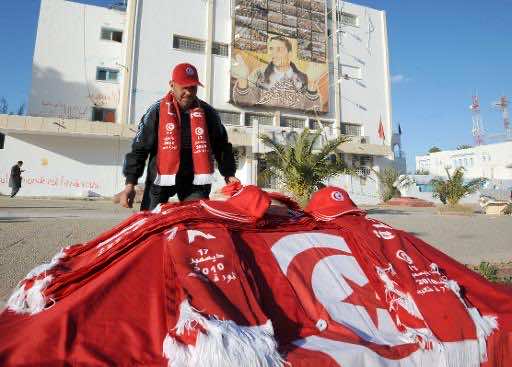 Sidi Bouzid — Tunisians gathered Tuesday at the birthplace of the Arab Spring to vent their anger at social exclusion three years after a street vendor burned himself to death in what became an iconic protest.

“For security reasons, the inauguration of the ceremony in the presence of the three leaders has been cancelled,” Mohamed Jalleli, one of the organisers of the event to commemorate the revolution, told AFP.

He did not elaborate on the nature of the threat, but a large security presence was deployed in Sidi Bouzid, where Marzouki and Ben Jaafar were heckled and pelted with stones at last year’s celebrations.

From early morning demonstrators started to gather outside the regional governor’s headquarters, where Bouazizi set himself on fire in a desperate act of protest against economic hardship and repression that became a fuse for uprisings across the region.

Three years on, unemployment in Tunisia remains stuck at 15 percent, with that figure rising to 24.4 percent, the nation’s highest, in the Sidi Bouzid region, home to nearly half a million people.

“None of the different governments of the past three years has managed to improve the economic circumstances of the men and women of this region. Its destiny as martyr continues to haunt the country,” said Tunisian daily La Presse, in an editorial entitled: “Sidi Bouzid, the volcano.”

Pro-reform activists who organised the Sidi Bouzid protest jointly with the powerful UGTT trade union confederation have called for a peaceful demonstration.

“Tuesday will be a day of rage and protests against the policies of the government which did not keep to its word and betrayed the promises of the revolution,” said activist Youssef Jlili.

There were no major ceremonies planned in the capital.

But numerous calls to protest outside the government’s headquarters in the Kasbah district have been launched via the Internet, including by Ansar al-Sharia, a banned jihadist group designated a “terrorist organisation” by the authorities.

“The struggle is mandatory and it must be a popular struggle… we support the planned protest at the Kasbah on Tuesday,” the group said on its official Facebook page.

The interior ministry has banned participation in any protests by organisations that are not recognised.

Since the assassination in July of opposition MP Mohamed Brahmi, police have carried out multiple arrests aimed at weakening the secretive group.

Demonstrators were to pay tribute to Brahmi and Chokri Belaid, and another leftist politician killed earlier this year.

The authorities accuse Ansar al-Sharia of being behind the killings, accusations that the group denies.

The murders plunged Tunisia into a deep political crisis which began to ease in October when the ruling Islamists and the mainly secular opposition struck a hard-won agreement to form an interim government of independents pending fresh elections.

And after months of wrangling, Tunisia’s political parties agreed Saturday to choose Industry Minister Mehdi Jomaa to head a government of independent figures tasked with organising elections in 2014.

But the protracted crisis and resulting economic malaise led organisers of Tuesday’s events to insist that the country’s leaders were not welcome in Sidi Bouzid.

“We categorically refuse their presence… because they have done nothing but impoverish our region. They are not credible,” said UGTT official Lazhar Ghmoudi.

Jomaa was chosen a day after a previous pick for premier agreed on by the outgoing government and the opposition, Mustapha Filali, 92, ruled himself out due to his age.

The ruling Islamist party Ennahda has led the coalition government since Tunisia held its first freely contested elections in October 2011.

“Three years have gone by and nothing has changed. The social and economic situation is still difficult and the region has plunged into misery,” activist Mondher Chaibi said ahead of Tuesday’s demonstration.