Tinjdad, Morocco - Boumalene Dades, an appealing little town in the Tinghir province, is located in southeast Morocco along the national road number 10, which connects Tinghir and Kelàa Megouna. It is an area of 75 km squared and is situated at  1500 meters above sea level. 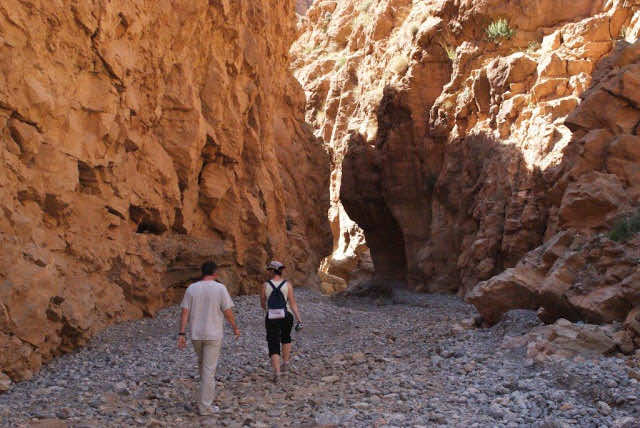 Tinjdad, Morocco – Boumalene Dades, an appealing little town in the Tinghir province, is located in southeast Morocco along the national road number 10, which connects Tinghir and Kelàa Megouna. It is an area of 75 km squared and is situated at  1500 meters above sea level.

Boumalene sits about 120 km from the center of Ouarzazate, and the majority of its inhabitants are Amazigh.

Etymologically, the name Boumalne Dades stemmed from some historical aspects that are based merely on oral culture. The Common belief is that  Boumalene derived from Bou l’Male which means a place of business and trade, especially of cattle. On the other hand, the word Dades comes from the story of a nomad who came to Boumalne. He was starving even though the region was known for its richness in fruits and vegetables; however, he could not eat without paying a fine. Yet, after some time passed, a person from Boumalne came across him and told him “Da Tech” which means “here, you can eat.” Afterward, this expression turned into Dades. 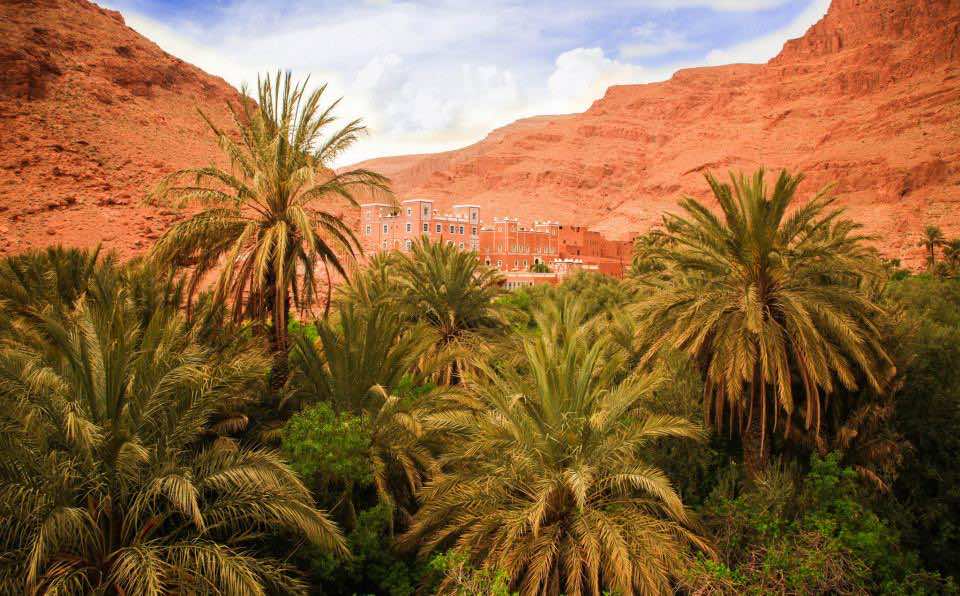 Boumalene Dades nowadays is considered one of the most attractive Moroccan touristic cities for many reasons. I will discuss some of the most significant attributes of this small city, including its history, famous cultural and historical sites, adobe building, the rose valley, the gorges of Dades, and its traditional art.

The History of the City

When it comes to history, it is very difficult to give authentic facts about Boumalene Dades as there is a lack of textual history. However, most historians consider that the historical settlement in Boumalene Dades passed in many stages starting from the shaping of tribes to the birth of their alliances. Tribes in Boumalne have different unknown origins, according to oral histories passed down from generation to generation.  There are tribes of black people, white people, Ait Atta and so on. No one knows which tribe was the first to settle down in Dades; each tribe has its own attitude and version of events. 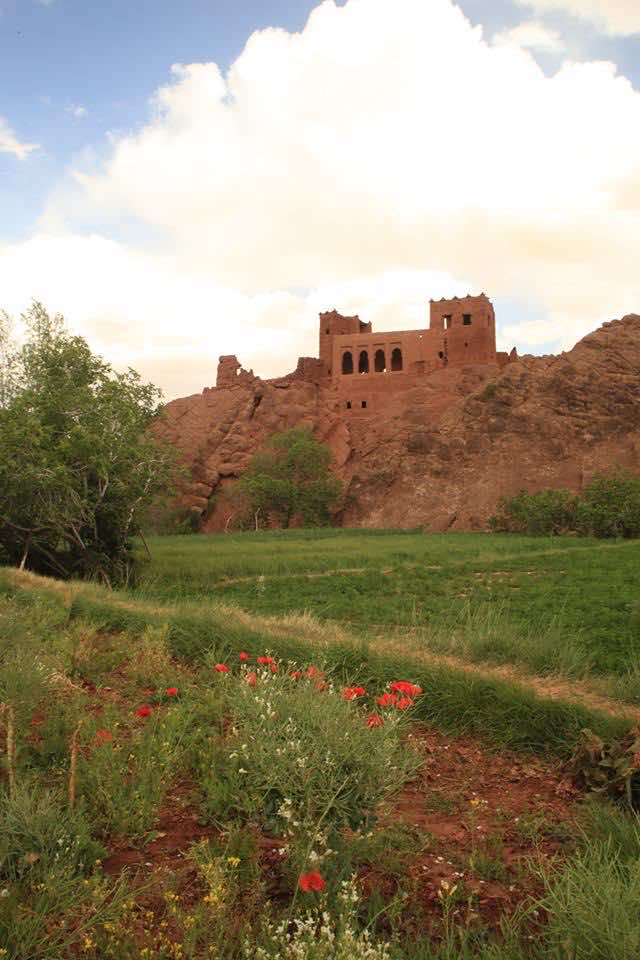 Therefore, to define the date of settlement in Dades in its entirety is very complicated. However, it is believed that the first dwelling in Dades was before the building of the Jewish Tiylit Castle which is located along the right bank of the Dades River. Here, according to Yihuda Perris’ Zahrat Lubnan’s book Hayyim Alzafarni his ancestors were expelled from Spain at the end of the 15th century, and then they came to Morocco and settled along the Dades River after they had bought it from Morocco’s Sultan.

The famous cultural and historical sites

Jews were one of the oldest people who lived in several places in south-east Morocco. We can find their traces in many places in the region, as their presence was considerable until the 1950s,  when most  Jewish people started leaving to live in Israel. Jewish people lived in the Tiylit Castle that is located on the Iourtguine land on the right side of Dades River. According to the oral heritage, the name of this tribe, Tiylit, was created during the sovereign of the Middle Dades, Almawla Aba  Amran. After the latter had been told by his assistants that a Jewish tribe came to settle down in Dades, he answered with the expression   “Til-yit”  which means “let it be” in Amazigh.  Since that time, their tribe was addressed as Tiylit of the Jews. The latter was populated by about 55 families. The following picture, which is hung on the wall of their symmetry in Zawiit Bir, includes the names of the last families that resided there.

During the period of the protectorate in Morocco, the French authorities entered Boumalne Dades in 1930. They named some people to represent them in the region. Mohdach was one of the French assistants, or Khlift as he was politically known. This political Kasbah, that he built, still represents him in the present day. It’s located in Aughrud, a small tribe located farfrom the Center of Boumalne Dades.  It’s a site that attracts tourists who are interested in the way it is built and in its history because it’s a symbol of authority, colonization, and people’s sufferings.  The people of the region contributed all they had to build it. They were even forced to work under very hard conditions such as working from dawn until dusk without resting or complaining.

The traditional adobe houses of southeast Morocco in general and the Kasbahs of Boumalne Dades in particular are just amazing. They become cold in the summer and warm in the winter. They contribute to the good health of the people. This type of building renders Boumalne Dades distinct from the rest of the country. Additionally, Boumalne Dades belongs to what is known as the “one thousand roads of Kasbahs.”

Furthermore, this historical technique of building represents the richness of the cultural heritage and civilization of the region’s inhabitants. Throughout the area, one can come across castles and Kasbahs that were constructed throughout the last century and earlier. Thus, this type of building is known for its great resistance against the severity of natural disasters. Also, adobe houses refer to that strong relation between Amazigh people and their land. All the materials  used to build a Kasbah or a castle is taken from local sources such as water, rocks, soil, wood, reed, and so on. However, for the last two decades, the state started encouraging people to build with cement, which had a negative impact on the traditional way of building. Furthermore people started building with new “modern” material  because of their attitude towards cement houses; people who have cement houses are considered rich and superior. 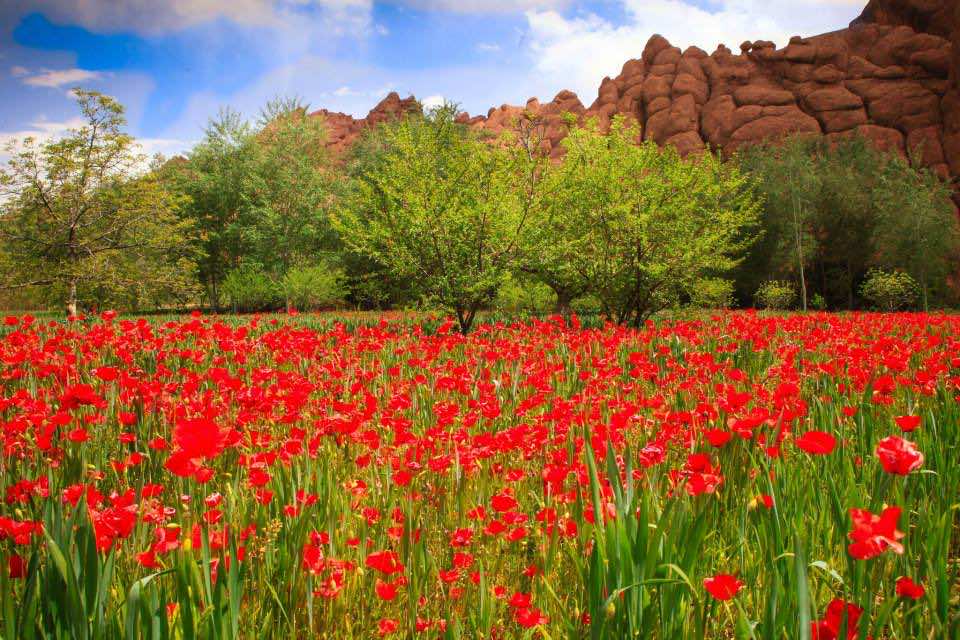 One of the most attractive features of Boumalne Dades and Kelàa Megouna is the rose valley. During Spring, , the whole region is colored with the beauty of the pink flowers of the Dades valley; the valley seems to be a bottle containing the purest of smells. Tourists all over the world prefer visiting the region during this season, which peaks in the months of April and May.  Also, the roses festival, which takes place at Kelàa Megouna, encourages tourists to  visit the region and discover the culture and traditions of both cities, as they seems to embody a single city because of their close proximity. They are connected by a 30 km street, which is believed to be the second longest streets in Africa. The two small cities also share the same culture, language, and history. 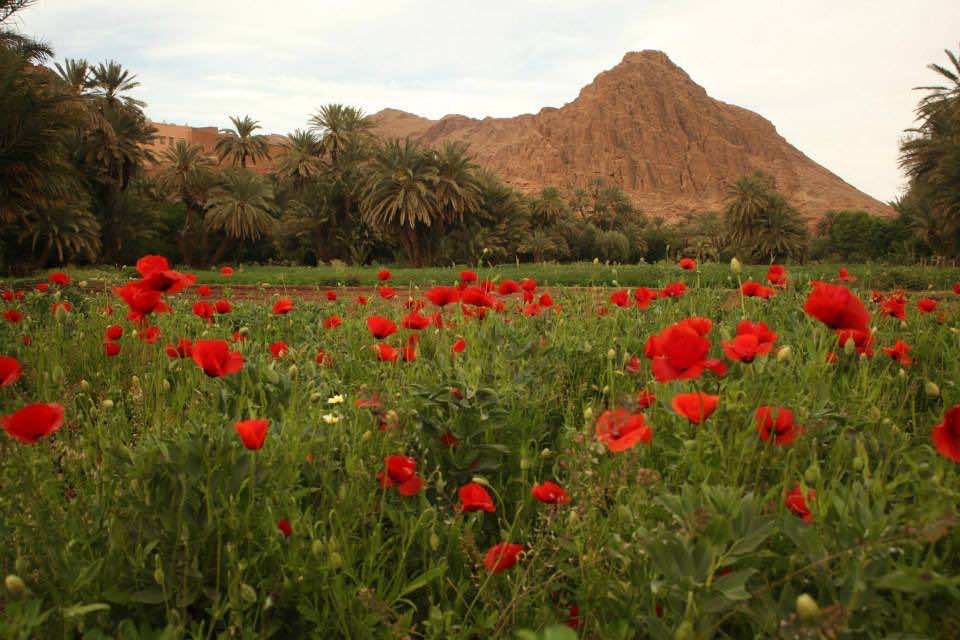 The Gorges of Dades

Boumalne Dades is famous for its beautiful and charming landscapes, as well as its idyllic gorges. Journeys are organized almost daily during the whole year to discover these landscapes that are located through a  distance of about 35 km to the north, between the center of Boumalne Dades and its outskirts. In about 10 km from Boumalne Dades to Ait Sdrat, and one can run across an area known as the “monkeys’ fingers.” This aptly named site takes the shape of  a long maze because of the many big rocks that make it a collection of difficult and intricate lanes, especially for people who like to go attempt such adventures.

On the same road one cannot help discovering the place on foot and taking souvenir pictures. After a distance of about 15 km, the gorges of Dades might easily catch the fancy of visitors, it’s a space of high mountains. In the same region, the curly road snakes make the spectacle amazing and interesting, and let the discoverer live a nice experience in which he or she hugs the pure and virgin nature.

Boumalne Dades is a space where every scene could easily inspire an artistic masterpiece. The manner of building throughout the whole region seems to be done in an artistic way, and people made sure that they decorated their houses with cultural symbols that are often found in the Tifinagh alphabets or traditional old symbols that go back to the era of Christianity or Judaism in the southeast of the Kingdom.

Also, women in Boumalne dress in a colorful and artistic style. They wear Tisbnay , T’ichtat and so on. Yet because of modernism and globalization, young men and women started wearing jeans and following the worldly fashion style in the last few decades, and they consequently tend to only wear traditional clothes for weddings and local celebrations.

Other reasons to visit Boumalne

Furthermore, we cannot mention art without referring to the traditional music of Boumalne Dades, Ahidous. The latter is formed by two rows; one row consists of men, and the other consists of women. Ahidous is played often in weddings and local celebrations. It’s a way of celebrating, and a means through which many social purposes are achieved, such as the courtship between young men and women.

However, in terms of music, nowadays the youth of Dades are oriented to activist singing in which they use modern instruments such as the guitar. They sing about poverty, identity, and social and political problems in the southeast of Morocco. But, they stay loyal to the traditional music as well.

To sum up, it’s worth mentioning the availability of the modern and traditional hotel structures in Boumalne Dades. These high quality places to stay, coupled with reliable transportation services, facilitate the discovery of the attractive city and its surrounding areas.