WASHINGTON - "We now have no strong moderate player. There is really no one who can stand between essentially Sunni jihadist extremists and the Assad government and pose a credible option." 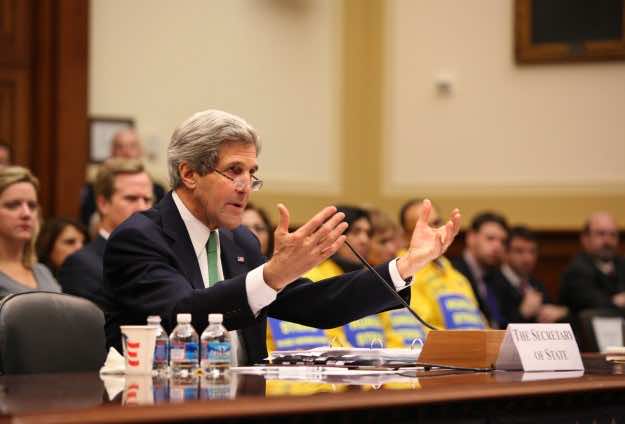 WASHINGTON – “We now have no strong moderate player. There is really no one who can stand between essentially Sunni jihadist extremists and the Assad government and pose a credible option.”

Washington’s recent announcement that it is open to engaging with a militant Islamist group highlights its growing desire to find a formidable ally in Syria.

Speaking to the press in the Filipino capital of Manila Tuesday, US Secretary of State John Kerry said the US has “not met yet” with the Islamic Front, “but it’s possible that it could take place.”

Such an outreach would mark a stark departure from Washington’s policy of solely backing the Free Syrian Army’s [FSA] secular forces. FSA Chief of Staff General Salim Idriss has not been able to consolidate power in key areas, and has been pushed out of strategically important zones in recent months.

The group’s relative weakness is in stark contrast to advances made by Islamist fighters in the war-torn nation.

Among them, the Islamic Front has already demonstrated its prowess, albeit in a manner not conducive to Washington’s strategy.

The nascent group was recently able to dislodge Western-backed forces from the Free Syrian Army’s northern headquarters in Bab al Hawa on the Turkish border, seizing nonlethal assistance provided by the US and its allies.

Formed in November, the Front arose after seven Islamist groups agreed to merge into a coalition estimated to be tens of thousands strong. The extent to which these groups have coalesced into a single command and control structure is still a topic of hot debate, but their reach extends to major cities such as Damascus and Aleppo, as well as Homs and Idlib.

In response to the raid, the US and the United Kingdom suspended shipments of nonlethal assistance to the FSA’s northern contingents.

The move underscores the relative weakness of Washington’s hitherto premier ally, and the dearth of options available to the world power.

“You may be able to deal with Assad, but you can scarcely say that this is the proper leader of Syria, that he represents some kind of popular acclaim. When it comes down to the other elements… […] From a practical viewpoint there is no one for the United States to deal with,” said Anthony Cordesman, a national security analyst with the Center for Strategic and International Studies, a Washington think tank.

“[The FSA’s Supreme Military Council] certainly remains relevant, but it is not a strong player. And that’s part of the problem. We now have no strong moderate player. There is really no one who can stand between essentially Sunni jihadist extremists and the Assad government and pose a credible option,” added Cordesman.

Mark Perry, an independent military and foreign affairs analyst, argued that Washington should work to further bolster its long-standing Syrian ally rather than seek an alternative to Idriss’ FSA.

“We do that too often. If we’re behind [Idriss], then let’s support him.  If he’s not relevant, let’s make him relevant. If he’s our guy then we need to stick with him,” he said.

He added, “All too often we’ve seen in the Obama administration that they’ll support one group, and then when the winds blow the other way we support the other group. If our chosen militia and revolutionaries are weakening, let’s strengthen them. Or let’s get out of the game altogether.”

Whither the “moderate” ally?

Both Kerry and State Department Deputy Spokesperson Marie Harf termed the Islamic Front a “moderate” group, but what that means, and whether that label will apply days, or months from now is unclear.

“One problem you have when you talk about the less extreme elements are really which elements, who is in charge, and are they going to be in charge next week,” queried Cordesman.

Any effort by the US to build relations with the Islamic Front would be a “terrible mistake” said Perry.

“It’s hard to criticize the Brotherhood in Egypt for being too Islamist and to support the coup there, and then to cozy up to these guys,” said Perry.

He further stated that drawing closer to the Islamic Front “would be, I think, a step over the line. It’s almost laughable. I understand, we are trying to retrieve the position that we had, and put people in Geneva, but this is the wrong way to do it.”

According to Perry, the US should draw lessons from prior experiences with hardline Salafist groups.

“I think that support for Salafists in the name of getting rid of dictators begins to look like what happened in Afghanistan when we seeded a revolution in the countryside against the Soviet Union for what we thought were good reasons,” commented Perry.