KONYA - The ten-day commemoration for Rumi's death culminates in the centuries-old Sufi ritual of whirling as Rumi celebrates reunion with God on the "Reunion Night." 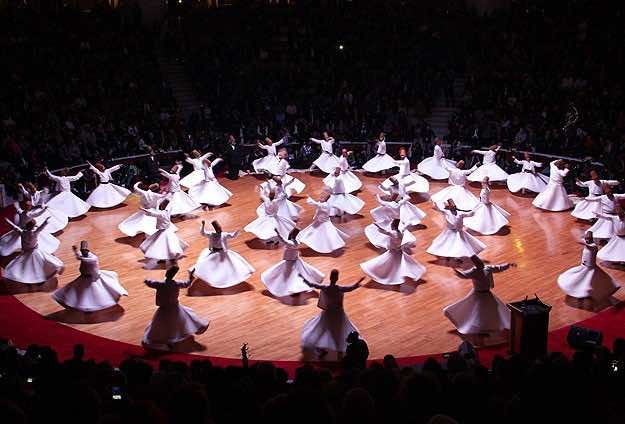 KONYA – The ten-day commemoration for Rumi’s death culminates in the centuries-old Sufi ritual of whirling as Rumi celebrates reunion with God on the “Reunion Night.”

Commemorators of the death of thirteenth century poet and mystic Jalal al-Din Rumi have experienced a timeless display of spirituality marking Rumi’s reunion with God each year over the last three quarters of a millennium in the central Anatolian city of Konya.

Rumi calls it a way to “taste perpetuity within mortality,” and this dazzling spectacle has left its mark on the world as a part of intangible human heritage – the traditional Sufi ritual of Sema known internationally as “whirling dervishes.”

The 740th Shebi Arus, or “Reunion Night” as Rumi called his death, is an occasion to celebrate rather than mourn.

The event relates felicitously to the spiritual journey it represents – a cycle of separation from and reunion with the Almighty God.

It begins with a somber opening, followed by a colorful concert of roaring Sufi tunes: a buoyant youth.

Then comes the maturing of the intellect, as when a short oration ensues, and the silence the music has left in its wake is broken only by the voice of a Sufi teacher.

And then the dervishes step on stage.

It couldn’t be more clear that they don’t belong in this hall of earthly beings. With palpable concentration, the large group of semazens (dervishes) are led by the “master” postnisin, who represents Rumi, and “leading” dervish (semazen basi) as they glide toward the death of their egoes. Their black cloaks symbolize the grave cover while white robes represent shrouds, with a light-brown hat standing for their tombstones as they yearn to transcend.

The spacious ring’s side is half-covered in shirt-sized white skins, and a red skin glows under the spotlight on the ornate rug where the postnisin will stand.

A Sufi singer begins chanting an ode to him without music called the Naat, marking the beginning of the Sema ceremony.

A reed flute taqsim – improvisation in free rhythm – follows in the second stage. The hollow flute is brought to life by breath, a token of the Divine breath which gives life to a human body made of earth.

Then comes Devr-i Veled – the greetings. The semazens greet each other around the red skin as they circle three times in one corner of the ring, moving in short and rhythmic steps.

The greetings, although seemingly bestowed upon one another, are part of the remembrance of God.

And the whirling begins.

First, all semazens line up along the side, promptly removing their black cloaks as the ego dies and they are reborn in spiritual truth so that they are ready to “taste perpetuity within mortality.”

They step out into the ring after receiving a kiss on the hat by the postnisin. Rejuvenated, they glide on like blossoming roses, opening their folded arms almost imperceptibly as they spin on their left feet in short twists, with their right feet driving their bodies.

Accompanied by gentle Sufi music, they whirl under a green light with their white robes spinning as if gripped by a strong wind. They remain placid in countenance and supple in posture, heads bowed to the side, with their left hands facing down to the earth and right hands facing up to the Divine.

Though similar, each has their own tempo. Some whirl with arms fully outstretched, others half-folded. Some keep their heads almost straight, others tilt them so their long hats are almost level with their shoulders. The leading semazen basi keeps walking among them, helping them keep distance.

They group back to the side in twos, threes and fours, waiting in semi-darkness after having been exposed to an awareness of God in the first whirl.

Then as the light overhead shifts from white to blue and red, they experience in a succession of whirls the unity of God in everything, and the ecstasy of total surrender to Him.

Finally, in the fourth time, the music is reduced to the sound of the reed flute and peace of heart arrives. The postnisin and semazen basi join the semazens’ whirl as they become the heavenly bodies, with the postnisin slowly rotating on his own axis – the sun – and the semazen basi on the side spinning a bit faster – the moon – as the semazens whirl in harmony with them.

After a long whirl comes the sound of Qur’anic recitation as semazens put back their black cloaks and take their places on the side under the glow of red light.

The semazen basi recites a prayer for the prophets, saints, scholars, leaders of the Islamic tradition and the Sufi legacy.

As the ritual concludes, the semazens shake hands in a close grip and kiss each other on the hand as the audience finds their voice in a torrent of applause.

An hour before midnight, the ritual hall comes back in focus. Rumi celebrates once again as the 740th Reunion Night draws to an end, but the experience remains.