Rabat - Moroccans from all walks of life are celebrating at the unison the deserved victory of Raja of Casablanca over Brazil’s Atletico Miniero in a heroic match that will remain for years if not decades to come in the memory of the Moroccan people.

Rabat – Moroccans from all walks of life are celebrating at the unison the deserved victory of Raja of Casablanca over Brazil’s Atletico Miniero in a heroic match that will remain for years if not decades to come in the memory of the Moroccan people.

Immediately after the final whistle of the referee, which sealed the fate of the game, tens of thousands of Moroccans across the country took to the street to share this moment of jubilation with their neighbors and to show to the world how a victory can have a cheerful impact on the spirit of a whole country.

“Long live Morocco, the King, Raja and Dima Raja,” were among slogans chanted by multitudinous joyful crowds across the country. 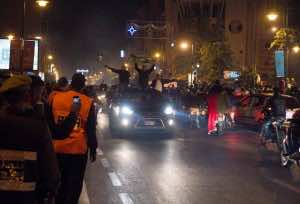 Nacer Arji, a 27-year old student in international studies from Al Akhayn University in Ifrane (60 km from Fez) could not hide his jubilation to see a Moroccan team reach the final of the FIFA Club World for the first time. He pointed out that what makes the victory so special is that Raja is ranked 8th in the Moroccan national league “Botola”, and a number of observers had written it off because of the start of the tournament.

“Raja honored the Moroccan Pro Elite Botola, since it is ranked number 8 in the League, but was still able to compete against the best teams in the world. Any foreign observer of the FIFA CLUB WORLD CUP now would ask him/herself about the Moroccan Botola, and I’m sure he/she would be wondering now if the team that is ranked 8 is playing as strong as the Raja of Casablanca, how does the team ranked one plays,” Nacer Arji he told Moroccan World News.

Hassan Samrhouni, a former player of WAC of Casablanca and president of the Washington Athletic club, which plays in Washington International soccer league said he is proud to be Moroccan and called on all Moroccans to support their team next Saturday.

“We all feel united in this historic moment  and Raja is no longer a club that represents Casablanca, but it represents the whole country,” he said.

“Every Moroccans should be behind Raja on the day of the final and we hope that they will support the players until the last minute of the match,” he added.

“I felt honored and proud to be Moroccan tonight when I saw how Fox Sport journalists were talking about Raja’s players and praising the beautiful way in which they defeated Ronaldinho’s teammates,” he further noted.

Hamid Lahrizi, a Moroccan expert in martial arts and President of WKC Team USA in Boston, said that this victory will boost the confidence of players who play in the national league, adding that Raja was a the peak of its game today.

“Raja was at its peak playing against the top teams of our generation, with great skills defeating world class teams full of international stars, such as Ronaldinho. This victory brings back some great memories from decades ago when Morocco won the African cup in 19776,” he said.

“Today Raja is an inspiration to Moroccans all over the world, especially to young local athlete inside Morocco who feel that only way to succeed is to play with a European team. Congrats to all the players and hank you Raja for the great game today, you made us proud Moroccans everywhere in the globe,” he added.

For his part, Mohammed Amine Bourkadi, a computer engineer from Rabat, said that everybody is fan of Raja tonight, adding that he was blown away when he saw how a Moroccan team managed to defeat world class teams, such as Monterrey and Atletico Mineiro.

“The whole Moroccan people are Rajaoui this week and I hope they will win the tournament,” he added.