DHAKA- 154 candidates were elected unopposed in Bangladesh in the upcoming parliamentary election to be held on January 5, 2014 as 18-party alliance is boycotting the polls. 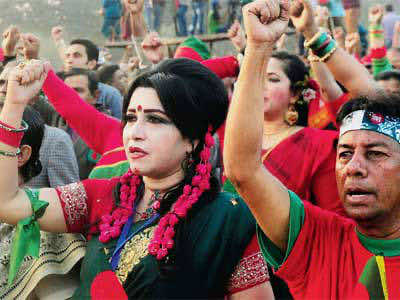 DHAKA– 154 candidates were elected unopposed in Bangladesh in the upcoming parliamentary election to be held on January 5, 2014 as 18-party alliance is boycotting the polls.

There will be no need for balloting in 154 constituencies out of the total 300 for the parliamentary election as lone candidate was found in the race in their respective constituencies after final scrutiny.

According to data reaching the Bangladesh Election Commission from across the country as of December 16, a total of 154 constituencies got single candidate.

But Bangladesh Election Commission yet to publish gazette notification about the unopposed elected candidates.

The Commission announced the election schedule of the 10th Bangladesh National Parliament on November 25, setting the balloting date as January 5, 2014.

Most of the registered political parties including Bangladesh Nationalist Party (BNP) led 18 party alliance are not participating in the polls. Opposition 18 party alliance said that they would not contest any election without formation of a non-party neutral government to oversee the polls.