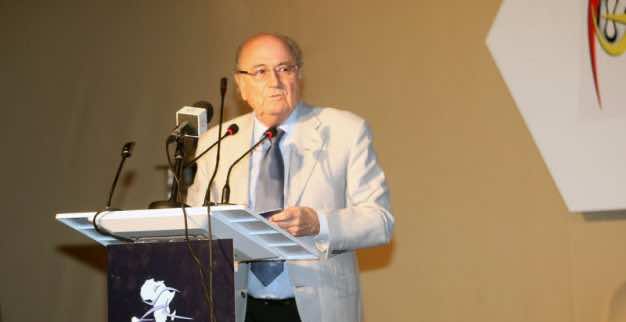 By
youssef sourgo
-
Youssef Sourgo is currently a Master’s student in Linguistic and Literary studies at Ain Chok Faculty of Letters and Humanities.
Dec 20, 2013
Spread the love

Casabalcan- FIFA president, Joseph Blater, expressed his satisfaction with the atmosphere surrounding the Club World Cup in Morocco, particularly after the qualification of Raja to the final.

“Although I am supposed to remain neutral, I had special feelings for Raja supporters. Congratulations to Raja for their qualifications to the final,” said Blatter on Thursday in a press conference in Marrakech.

FIFA President noted that Morocco has all it takes to organize the World Cup 2026, especially after it successfully organizing the current edition of the FIFA Club World Cup.

Blater also urged the organizing committee of the World Club Cup in Morocco to work on their “mistakes” for the next edition of the tournament, which will be hosted in Morocco in December 2014.

“Good organization requires both the Moroccan committee and FIFA to unite their efforts in order to assess the current edition of the event,” he added.

Raja earned a spot to the final of the tournament after winning against Brazilian Atletico Mineiro 3-1, thus stirring an atmosphere of hysterical celebration all over Morocco.

Raja will play the final of the World Club Cup against the German club, Bayern Munich next Saturday.

Raja enters History as being the first Arab club to make it to the final of this prestigious Cup since it was first established in 2000.

Morocco is also the first African country to host this event, which took place previously in Brazil, the United Arab Emirates and Japan.

160 players, from 31 different nationalities, have taken part in this edition of the FIFA Club World Cup.