BANGUI – At least twelve Muslims were killed on Friday when the self-styled Christian militia known as anti-balaka attacked a predominantly Muslim neighborhood of Bangui, the capital of the Central African Republic (CAR). 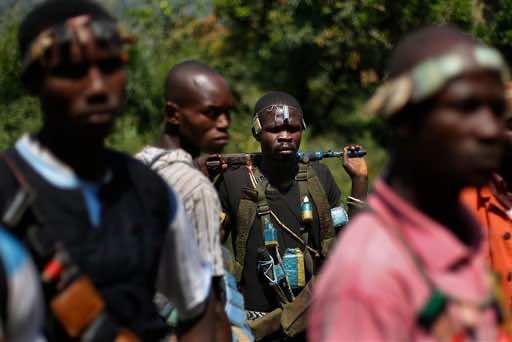 BANGUI – At least twelve Muslims were killed on Friday when the self-styled Christian militia known as anti-balaka attacked a predominantly Muslim neighborhood of Bangui, the capital of the Central African Republic (CAR).

An Anadolu Agency reporter in the scene counted twelve dead bodies inside the local mosque.

According to our reporter, the slain people had wounds caused by machetes in the nick, face and other parts of their bodies.

Local residents told AA the attack occurred at 6:30am and accused the French peacekeepers of failing to protect them.

“The French were there and did nothing,” Yahiya Abu Bakr, chairman of a committee that oversees the local mosque told AA.

No French spokesman was immediately available for comment until the filing of this report.

Kilometer 5 is the strongest standing Muslim suburb in Bangui and its where most Muslims who were displaced from Christian neighborhoods have sought asylum.

According to our reporter, angry Muslims stood outside their homes and businesses carrying machetes and knives to defend themselves.

It described the anti-balaka militias as “local vigilantes and soldiers loyal to the previous government.”

It refuted claims that the militias were local “self-defense” forces, asserting that “their actions and rhetoric are often violently anti-Muslim.”

CAR, a landlocked, mineral-rich country, descended into anarchy in March, when Seleka rebels – said to be mostly Muslims – ousted Christian president François Bozize, who had come to power in a 2003 coup.

The months since have seen the emergence of self-styled Christian militias, known as the “anti-balaka.”