Hezbollah chief Hassan Nasrallah warned Friday that his Lebanese Shiite movement will "punish" Israel for the killing of a top leader earlier this month. 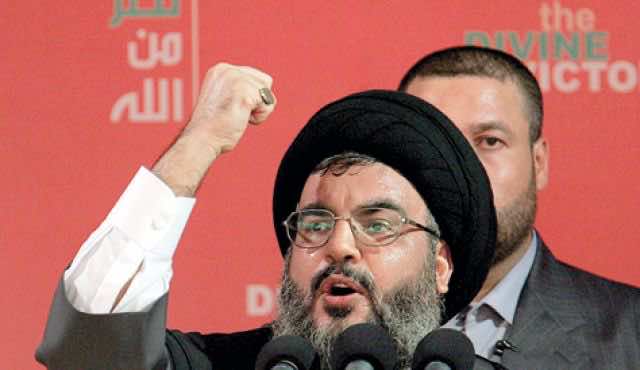 Hezbollah chief Hassan Nasrallah warned Friday that his Lebanese Shiite movement will “punish” Israel for the killing of a top leader earlier this month.

“The killers will be punished sooner or later… Those who killed our brothers will not know safety anywhere in the world,” he said in a televised tribute to Hassan al-Lakiss, whose killing Hezbollah blamed on Israel despite its denials.

“We and the Israelis have accounts that need settling. There are old and new debts between us,” said Nasrallah.

Lakiss’s “blood has not been spilt in vain… The punishment will come whenever we decide it,” Hezbollah’s secretary general added.

“The Israelis think that Hezbollah is busy (with Syria’s war) and with the situation in Lebanon… I tell them: ‘You’re making a mistake,'” he said.

Nasrallah was referring to his movement’s involvement in the war in neighbouring Syria.

Thousands of Hezbollah troops are fighting alongside President Bashar al-Assad’s troops, in a bid to crush a massive Sunni-led insurgency.

Lakiss was assassinated in the parking of his apartment building on November 4 in the southern suburbs of Beirut, a stronghold of Hezbollah.

Nasrallah said the top leader was “one of the brains of Hezbollah,” though he refused to reveal his position in the party, though he did say his role was linked to his “work as a jihadist.”

“He worked to develop (Hezbollah’s) capacity,” said Nasrallah, adding he was “a brother and a friend.”

The last time a top Hezbollah leader was assassinated was in 2008, when Imad Mughniyeh was killed in a Damascus car bomb blast.