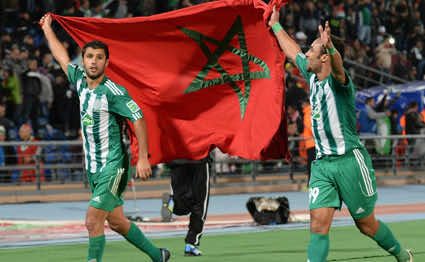 “The dream is far from over yet and we’ll be giving it all we have against Bayern, right up to the final whistle,” said Raja forward Mouhssine Iajour.

“We never give up. This team has got so much mental strength to draw on.”

The Moroccan champions — who only qualified by being hosts — have won all three matches on their run to the final, beating Auckland City 2-1 in a play-off, then Mexico’s CF Monterrey by the same margin in the quarter-finals.

They saved the biggest surprise for Ronaldinho’s Mineiro when they floored the Brazilians to become only the second African side to reach the Club World Cup final.

Their run comes after a remarkable few weeks for the Moroccans, who saw coach Mohamed Fakhir depart days before the tournament started after a run of defeats.

In all of their three matches, Raja have opened the scoring, only for the opposition to equalise before Casablanca dug deep to make the next round.

“We’ve been on a high even though we haven’t been considered favourites, and we’ve never stopped believing in our chances,” said midfielder Chemseddine Chtibi.

A significant factor Bayern will have to deal with in Saturday’s final is the large number of noisy Raja fans expected at the Marrakech Stadium.

It’s like having the whole of Morocco behind us. You can achieve the most amazing things with support like that,” said Chtibi.

Now only Bayern stand in the way of Raja lifting the Club World Cup, but the European champions have no intention of letting a fifth major title in 2013 slip from their grasp.

But the title-hungry Bavarians are wary of dismissing the Moroccan minnows.

“Everyone expected Atletico Mineiro to be in the final,” said Bayern chairman Karl-Heinz Rummenigge.

“No-one, not even here in Morocco, had bargained on Casablanca reaching the final.

“It’s a surprise, also for us.

“We must not be overbearing and arrogant, just because they are not as well known in football world.”

But Rummenigge backed Pep Guardiola-coached Bayern to brush aside Raja, just as they did Asian Champions Guangzhou Evergrande in Wednesday’s 3-0 semi-final victory.

“The team is too stabile, too clear in character and the trainer is too ambitious,” said Rummenigge, listing the reasons why Bayern will not lose the final.

“We have swept up everything else there is to win.”

Rummenigge says Bayern will use the passionate support of their rivals to motivate themselves.

“They will be very motivated as they go to do their jobs, there will be a great atmosphere.”