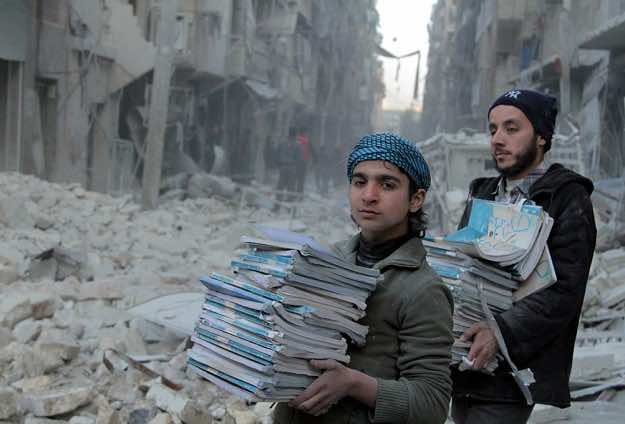 “Syrian government forces appeared in some cases to target civilians and civilian structures deliberately or did not target an apparent military objective”, said the human rights watchdog Saturday in a report.

After months of stalemate between government and opposition forces in Aleppo, HRW said it had documented an intensification of government attacks starting on November 23.

The group said December 15 to 18 saw the most intense aerial attacks in Aleppo to date.

The London-based Syrian Network for Human Rights (SNHR), which tracked civilian and dissident casualties in Syria, said it had documented the deaths of 232 civilians — the vast majority from airstrikes — that had occurred between December 15 and 18

The attacks have hit residential and shopping areas either missing possible military targets or with little indication of any intended military objective in the vicinity.

“The Syrian Air Force is either criminally incompetent, doesn’t’t care whether it kills scores of civilians — or deliberately targets civilian areas”, said Solvang, the HRW researcher.

Another Syria-based monitoring group that systematically collects information about deaths in the conflict, the Violations Documentation Center (VDC), collected the names of 206 killed in aerial attacks between December 15 and 18, including two rebel fighters.

VDC has documented the killings of 433 people in aerial attacks in the entire Aleppo governorate between November 22 and December 18, only eight of them opposition fighters.

Opposition forces also appear to have violated international law in the latest intensification of the fighting by indiscriminately launching rockets and mortars into civilian areas in the government-controlled part of Aleppo, according to the HRW report.

Peace talks are scheduled to begin in the “Geneva 2” political negotiations, the second edition of an international conference set for January 22, 2014, between the government and some parts of the opposition in Montreux, Switzerland.

The Geneva 2 succeeds the first meeting that gathered world powers in June of last year.

The first meeting had resulted in a draft resolution on ending violence and taking necessary steps to restore peace and order in war-torn Syria. The resolution, however, proved abortive due to increasing instability in the country.

“The United Nations Security Council should refer the situation in Syria to the International Criminal Court, impose a weapons embargo on the government, and adopt sanctions against government officials implicated in violations”, said HRW.

“As the world focused on potential peace talks, the Syrian government has been attacking civilian areas with significant firepower,” Solvang said. ”Even as diplomats try to find a political solution, the world should not silently accept the unlawful killing of civilians.”