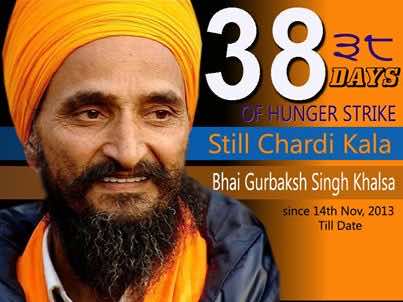 Chicago- In peaceful protest of the unfair treatment of Sikh political prisoners in India, Bhai Gurbaksh Singh Khalsa, a Sikh human rights worker, is on hunger campaigning for the release of illegally detained Sikh Prisoners in Indian jails.

According to information available from Sikh Siyasat News (SSN), Bhai Gurbaksh Singh, who has been on a continuous hunger strike since November 14, 2013, is seeking the release of six Sikh political prisoners who are languishing in various jails in India despite having completed the terms of their sentences in accordance with their conviction records.

Human rights groups Sikhs for Justice (SFJ) and All India Sikh Students Federation (AISSF) have approached the United Nations Working Group with respect to  these arbitrary detentions seeking to secure the release of the Sikh detainees in India.

In a complaint and urgent appeal addressed to Malick Sow, chair-rapporteur for the UN “Working Group on Arbitrary Detentions” and Ivan Šimonovic, Assistant Secretary General for Human Rights, the rights groups urged the UN to push India toward releasing the Sikh prisoners. The complaint to the Working Group states that “the actions of the Indian government related to continuous arbitrary detention of Sikh Prisoners of Conscience violate every norm of democracy, Universal Declaration of Human Rights and International laws.”

“On one hand the Indian government and justice system failed to prosecute those who massacred thousands of Sikhs during November 1984, while on the other hand Sikh activists continue to face arbitrary detentions without any charges,”said Pannu.

“Juxtaposition of both the cases shows discrimination clearly,” he added.  Meanwhile, Sikh groups have initiated an “Action Alert” on social media also asking the community to email the UN Working Group on Arbitrary Detentions to push India for the release of Sikh Prisoners imprisoned beyond the period of their sentences.