KHARTOUM - One expected scenario is that the country's political rivals Kiir and Machar will mend their fences, not to benefit Khartoum 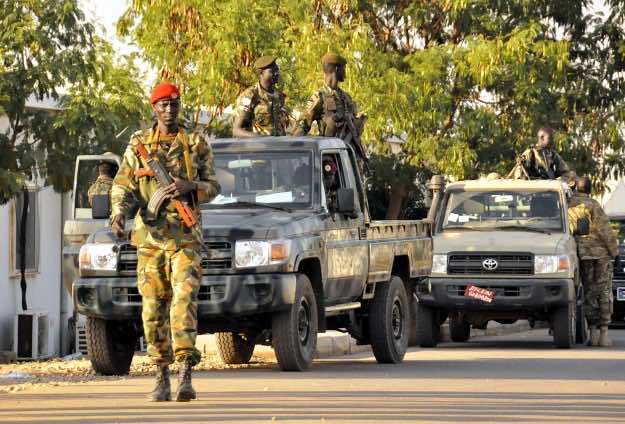 KHARTOUM – One expected scenario is that the country’s political rivals Kiir and Machar will mend their fences, not to benefit Khartoum

A Sudanese expert Sunday drew three possible scenarios for the conflict in South Sudan, but said none of these expected courses of events would be in the best interests of Khartoum.

“Khartoum has been pressuring for several decisions taken recently by South Sudanese President Salva Kiir, but now the decisions seem to be backfiring,” Adam Mohamed Ahmed, a political science professor from Alzaiem Alazhari University, told Anadolu Agency in an interview.

Violence erupted in South Sudan, the world’s newest country, last week between rival army units, leaving hundreds dead. South Sudanese President Salva Kiir appeared on TV to say that the violence broke out due to a botched military coup against his presidency and accused sacked vice president Riek Machar of being behind the putsch.

A major government-led crackdown in the following days landed many of Kiir’s political opponents in jail, but Machar managed to flee to the stronghold of his tribe.

Kiir fired Machar in July, a decision that some observers say was taken upon a tip from Khartoum in the north, which viewed Machar and a group of other South Sudanese politicians as inimical to rapprochement between the north and the south. The Sudanese government is said to have pressured Kiir to sack Machar as a condition for allowing the oil of the land-locked south to pass through the territories of the north.

Now, forces loyal to Machar say they are in control of major parts of two of South Sudan’s ten states, namely Jonglei and Unity. The latter state produces much of South Sudan’s oil, which accounts for around 98% of national income.

Ahmed says one of the expected scenarios for the conflict in South Sudan is that the country’s political rivals, namely Kiir and Machar, would mend their fences, but this will not benefit Khartoum.

“Another possible scenario is for the war to keep on blazing until Kiir is brought down,” Ahmed said.

Ahmed says Nuer fighters are tough and could outnumber forces loyal to Kiir in the army, which at the end makes the balance of power tilt in Machar’s favor.

Turmoil in South Sudan had already sent thousands of residents to seek refuge at United Nations headquarters in the different states, while there have been reports that the Kiir government crackdown on the opposition is taking ethnic and religious dimensions.

Ahmed says a third expected scenario for violence in South Sudan is for the country to turn into total chaos, opening the door for large amounts of arms to enter the country and conflicts to rage in all parts.

“The conflicts in this case can seep out of South Sudan and into border areas with Sudan, which will harm Khartoum greatly,” Ahmed said.

And apart from the security and military concerns the Sudanese government might have in this regard, the conflict in the south is expected to bring the cash-strapped north untold economic losses.

South Sudan pays the north a staggering $3 billion in oil shipping fees every year. A suspension of oil exports from the south means that the Sudanese treasury will be deprived of this much-needed cash.

Sudan is still far from recovering the financial woes from losing 75 percent of its oilfields to the south after the latter’s separation. These oilfields used to contribute around 50 percent of Sudan’s gross domestic product.

South Sudan today produces 300,000 barrels of oil every day and most of this production comes from the Unity State.