NOUAKCHOTT – The ruling party's gains, however, did not stop there, with its allies picking up another 36 parliamentary seats. 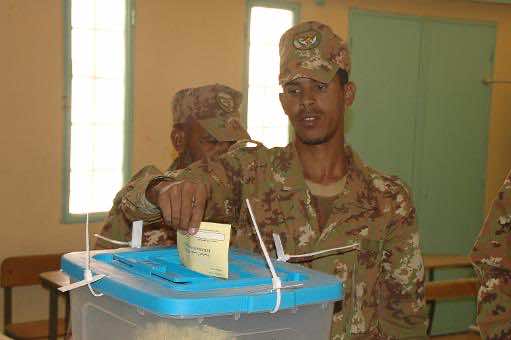 NOUAKCHOTT – The ruling party’s gains, however, did not stop there, with its allies picking up another 36 parliamentary seats.

Commission president Abdullah Ould Ahmed told a press conference that the ruling party had managed to win 22 out of the 30 parliamentary seats up for grabs in Saturday’s second round of polling.

The sweeping second round victory secured a 50.3 percent representation for the ruling party in Mauritania’s 147-seat parliament.

The party also won local council elections in 80 out of 113 municipalities in the second round, meaning that it had won around 74 percent of the country’s 218 municipal council seats, Ahmed said.

The ruling party’s gains, however, did not stop there, with its allies picking up another 36 parliamentary seats.

Opposition parties, meanwhile, only managed to win 37 parliamentary seats in the two rounds, including 16 seats for the Muslim Brotherhood’s party and 12 seats for the Al-Wiam Party.

“The people of Mauritania has proven its awareness of the political requirements of the present time,” Ahmed said. “The people has demonstrated its keenness on democracy through a civil and civilized method of peaceful transfer of power.”

On Saturday, Mauritania’s 1.2 million eligible voters headed to polling stations around the nation to elect municipal council representatives and lawmakers who will sit in parliament for the next five years.

The ruling party also won 161 of the 218 municipal seats contested in the two election rounds. The National Rally for Reform and Development Party, for its part, won 16 seats, the commission noted, while other opposition parties picked up seven seats.

Ahmed said his commission was open to criticism regarding its performance, with a view to improving the electoral process in the future.

Senior National Rally member Shekhani Beebeh had said that the party – seen as the Muslim Brotherhood’s political arm in Mauritania – had managed to win 16 parliamentary seats and 18 municipal seats in the two electoral rounds.

Beebeh lashed out at the electoral commission for what he described as its failure to take his party’s reservations about alleged voting irregularities seriously.