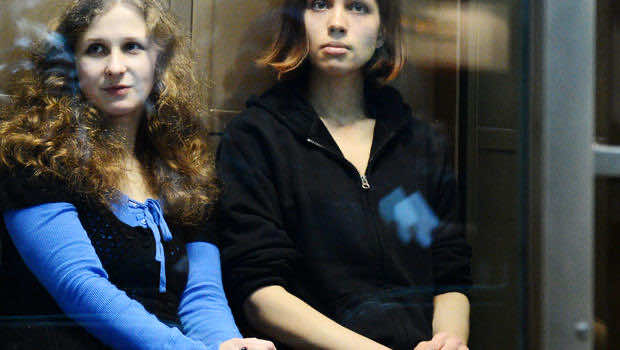 Russian punk band Pussy Riot’s  two members were released from jail on Monday under an amnesty allowing their early release from two-year sentence.

Nadezhda Tolokonnikova  became the second Pussy Riot band member to be released  on Monday hours after her bandmate Maria Alyokhina was released in Nizhny Novgorod. Tolokonnikova was jailed in the Siberian region of Krasnoyarsk.

Maria Alyokhina, 25, and Nadezhda Tolokonnikova, 24, were convicted of hooliganism for performing a “punk prayer”  against Putin’s ties to the Russian Orthodox church .

They had been due for release in March but are being freed sooner under an amnesty declared by Putin.

Russian parliament passed an amnesty bill last week, allowing the release of thousands of inmates. Alekhina and Tolokonnikova qualify for amnesty because they have small children.

A third member of the band, Yekaterina Samutsevich, was released last year on a suspended sentence.

Russia’s Supreme Court earlier this month ordered a review of the Pussy Riot case, saying that a lower court did not fully prove their guilt and did not take their family circumstances into consideration when reaching the verdict.

Five band members took to the altar in Moscow’s main Christ the Savior Cathedral in February 2012, wearing brightly colored balaclavas and calling on the Virgin Mary to “expel” Putin.  Two members of the band, which says their protest was meant to raise concern about increasingly close ties between the state and the church, were never caught.