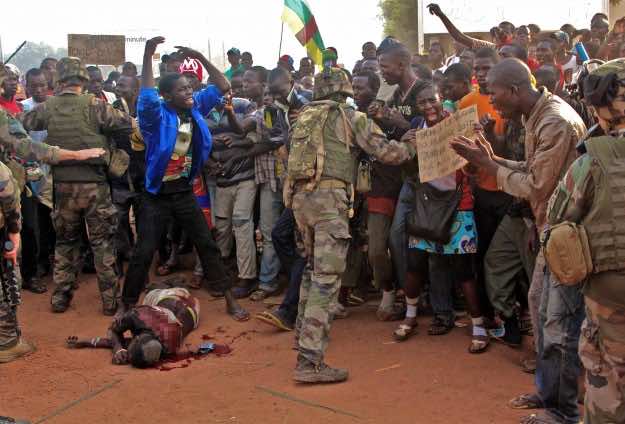 “The French are now siding with the anti-balaka,” General Mahamat Nouradine Adam, minister of state for security, told Anadolu Agency in an exclusive interview.

“They’re providing them with arms, food, medicine and uniforms,” he charged. “They now have new guns.”

CAR, a mineral-rich landlocked country, descended into anarchy in March, when Seleka rebels – said to be mostly Muslims – ousted Christian president François Bozize, who had assumed power in a 2003 coup.

The months since have seen the emergence of self-styled “anti-balaka” Christian militias.

In a Thursday report, Human Rights Watch (HRW) described the anti-balaka as “local vigilantes and soldiers loyal to the previous government.”

In its report, HRW asserted that the Christian militia had perpetrated a number of recent “atrocities” against local Muslim communities, including the murder of several hundred Muslims and the burning of their homes and mosques.

On Sunday, representatives of CAR’s Muslim community gave French troops a one-week deadline by which to end what they described as “French support” for the anti-balaka.

They threatened to stage a rebellion against the French and partition the country into a Muslim north and a Christian south.

Under a UN mandate to restore security in its former colony, France has deployed nearly 1,600 troops in CAR.

“Before the French brought their troops into the country, we had relative stability,” the minister said.

“Everything was going to be okay, but they intervened.”

“The French were supposed to be a neutral peacekeeping force, but now they’re one-sided,” Adam argued.

A spokesman for the French peacekeeping contingent was not immediately available to comment on the accusations.

“We found weapons inside a church on Friday. The anti-balaka have been hiding weapons inside the church,” he said, suggesting that western media ignored the news.

“We just took the weapons and left the people we found in possession of the weapons,” the minister said, adding that he had been accompanied by African peacekeepers when the weapons were found.

“This shows that some of the meetings to attack Muslims are planned inside the church,” the minister suggested.

But Bangui Archbishop Mgr. Dieudonne Nzapalainga, for his part, denied that any weapons had been found inside the church.

He told AA that the weapons had been kept outside a church near which some anti-balaka fighters had been hiding.

Adam noted that some French media outlets had reported on Friday that ex-Seleka fighters in the predominantly Muslim Kilometer 5 neighborhood were exchanging fire with anti-balaka fighters.

“The reality was that the anti-balaka had attacked a defenseless Muslim population in the area,” said the minister. “Journalists must tell the truth and not side with groups.”

According to the Red Cross, at least 29 Muslims were killed in Friday’s anti-balaka attack on the Muslim neighborhood.

The security minister, who had been deputy leader of the disbanded seleka coalition, claimed that no seleka fighters were currently on the streets.

“We disbanded Seleka in September,” he told AA. “All those who joined the national army are currently in camps.”

When asked if some ex-seleka vehicles and troops were still patrolling certain areas, the minister denied reports to this effect.

“We agreed with the peacekeepers to take our soldiers off the streets because they were being accused… of committing crimes,” he recalled.

The minister asserted that ex-seleka soldiers were not even allowed to leave their barracks to visit their families.

“There are currently no ex-Seleka fighters on the streets of Bangui; they’re all living in the barracks,” he reiterated.

“So whoever commits a crime in the name of being an ex-seleka is not one of our soldiers.”

General Adam said their political rival should wait until elections.

“We went into the bush to fight the former regime because our communities were oppressed and marginalized and the country was being mismanaged,” the former seleka leader said.

“Our enemies have not given us an opportunity to showcase how we can effectively run the country,” he charged.

“There have been many coups in CAR, but they have opposed our coup because the president and some of us are Muslims,” the minister said.

“Those opposed to our government should be patient until elections are held in 18 months,” he added. “But for now, we’re in charge.”