ISLAMABAD - Pakistan's federal government has assigns some 10,000 army personnel across the country. 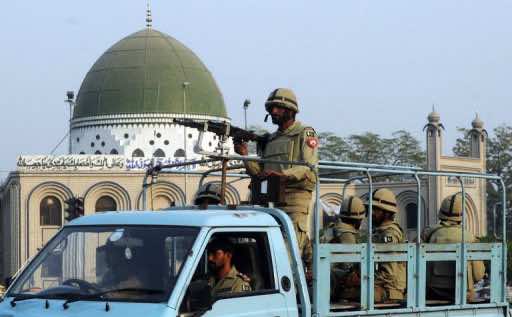 ISLAMABAD – Pakistan’s federal government has assigns some 10,000 army personnel across the country.

Pakistan’s federal government has assigned some 10,000 army personnel across the country to avert any unfavorable incident on Tuesday on the occasion of the “Chehlum,” which marks the 40th day after martyrdom of Prophet Muhammad’s grandson Imam Hussein bin-Ali in 680.

Additional troops of paramilitary forces known as Rangers will remain on stand by in cities which have been declared sensitive amid intelligence reports suggesting terrorists attacks on Shiite processions.

The administration has banned pillion riding on motorcycles in all four provinces on Monday and Tuesday, as well as the displaying of even licensed arms in several districts.

Tension runs high in the garrison city of Rawalpindi where rival Shiite and Sunni groups have announced processions along the same route on Tuesday.

The police have rounded up various members of the Ahl-e-Sunnatwal Jammat (ASWJ) Sunni group, which announced a rally from the raja bazaar in Rawalpindi where 12 people were killed on November 15 in a mob attack on a Sunni Mosque, reportedly by participants of a Shiite procession.

The Interior Ministry has sent a proposal to the federal government to suspend cellular phone service in six major cities, including capital Islamabad, on Tuesday.

Pakistan, a Sunni majority country, has had a long history of Shiite-Sunni violence killing thousands of people during the last three decades.

Sunnis make up 85 percent of the 180 million population, while Shiites constitute 10 percent.