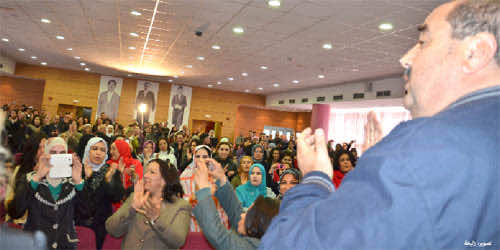 By
youssef sourgo
-
Youssef Sourgo is currently a Master’s student in Linguistic and Literary studies at Ain Chok Faculty of Letters and Humanities.
Dec 23, 2013

Casablanca- Compared to other countries in the MENA region, gender equality in Morocco has reached remarkable stages, especially with the implementation of Moudawana (family code) 2013. Today, USFP is taking it to the next level by addressing the “taboos of gender equality in inheritance and polygamy.”

In this context, the Socialist Union of Popular Forces party (USFP) organized in Rabat, December 20-22, the 7th edition of the Congress of Ittihadie Woman to address the issue of gender equality in inheritance.

“The Moudawana should not be regarded as a sacred text immune to amendment,” reads a conference document, “Polygamy as well as child marriage must be penalized. Finally, it is time for equality in inheritance.”

For the USFP, a liberal modernist party, gender equality is the last taboo in the Arab-Muslim societies to be addressed along with the abolition of the death penalty. The argument is that there is a wide chasm between the sacred text and people’s interpretation of it, and that mentalities are changing and humanism is regaining ground.

Driss Lachgar, USFP’s leader, stressed these very claims at the opening of the conference.

The USFP shed light on the provisions of the Moroccan Constitution relating to gender equality and highlighted Moroccans’ hopes for parity.

The surprise was to see Hamid Chabat, Istiqlal Party’s leader and Lachgar’s comrade, following in the footsteps of the USFP on such an uncertain road.

The theme of the 7th Congress of the Ittihadie woman sets the tone: “civil state, the basis of complete citizenship.”.

For USFP, marital Status is the translation of Dawla Madania (civil state)—anything but a theocratic state.

“Ittihadies women will open their organization to all women carrying a modernist democratic project ” MAP quoted Driss Lachgar as saying.

With his statement in favor of gender equality in inheritance, the USFP has set the stage for a new heated debate in Morocco.