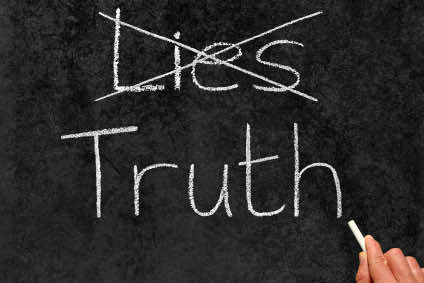 We often hear that lies make friends, while the truth makes enemies. All this boils down to the fact that nowadays we resent somebody commenting on the reality of what we are going through in life. We prefer to cling to the views of people who tell us lies while we live the illusion that we are leading the best life ever on earth, when in fact things are not so great.

I am not being pessimistic here. Rather, I prefer to associate with people who tell me the truth even if they make me cry. Crying leads me to see what is wrong with my life, while smiling always gives me the impression that life is good. It really is. Yet, if it is accompanied with lies, it no longer is. This is the philosophy I have adopted in my life. I do not want to wallow in ignorance and embrace it just because some think that ignorance is bliss. No, for me, it is not. Ignorance, for me, is a calamity. I would rather cry now and then be amazed later by beautiful things in life than smile now and then be disappointed later.

Recently, Casablanca’s Raja team won two challenging matches during the 2013 Club World Cup championship held in Morocco. Frankly, I enjoyed watching the matches and hoped that Raja would win. But, I did not celebrate it, nor did I feel that an atom of my patriotism was kindled. I did not clap my hands, nor did I applaud the players. I did not give a standing ovation for this team, either. I must admit that I attempted to utter a word in felicity, but in vain. I tried to celebrate the victory, but I failed to. I was not able to glorify Raja’s unprecedented success.

I cried instead of smiling. Upon the victory, I instantly remembered the large number of teachers who have been beaten, injured, and taunted during the recent protests in Rabat. Sometimes, I think to myself that football has nothing to do with teachers. But, since people who criticize me for not celebrating Raja’s victory say that celebrating the achievement of the team is a sign of patriotism, love, and pride for our home country Morocco, I ask myself what beating, dragging and degrading teachers are a sign of. Here, I believe that Moroccan football is a big lie that makes Moroccans smile, particularly for the team’s transient success, and that Raja’s qualification to the championship final is merely an exception that proves the rule.

This year’s exception has made Moroccans easily forget past defeats as well as the millions of Dirhams the Moroccan federation of football has in my view wasted without reaping anything in return. What victory are the Moroccan masses talking about? Can this lie called Moroccan football trick the masses into wearing a smile? Regrettably, when the Moroccan government told its citizens this lie, the majority of Moroccans laughed hysterically. Even Abdelilah Benkirane, head of the government, celebrated the lie. I call it a lie because it is an exception, not a regular achievement as is the case with other football teams such as Bayern Munich and Atlético Mineiro. Regrettably, we forget past setbacks. That is why we smile all the time when Raja scores a goal.

It is true Raja’s victory is a once-in-a-lifetime achievement. But, to glorify it and make Moroccans take to the street celebrating it in all parts of Morocco gives me the impression that football has become their opium. Football becomes the opium of the masses only in countries that lag behind in education, social justice, health, development and science. Some of us say that Raja has at the very least reached a prestigious and honorable ranking in the Champions with a smaller budget than those of other participating teams. Others say that Raja has brought our country pride and prestige. We confine pride and prestige to football, not to education, the most powerful weapon the Germans have used to change their country. Bayern Munich belongs to Germany.

Other Moroccans say that Bayern’s players have applauded Raja players in recognition for their outstanding performance. This acknowledgment is an honor, these Moroccans add. When are the Germans going to recognize our education, health centers, development, medicine, science, social justice? Why do other people recognize us only when we are playing and singing, not when we are acting and inventing? They tell us lies, and instead of crying, we smile. If they told us the truth, we would cry. But, they do not. Some of us compare Bayern with Raja. We are good at comparing the Germans and Moroccans only when it comes to playing football. I am not against playing football and building our teams. Rather, I am against prioritizing football in our lives and glorifying our scored goals as though we scaled the moon, solved or alleviated the ills of unemployment, poverty, marginalization, and illiteracy.

If one raises the issue of the social ills gripping Morocco, many people grimace and wear despondent expressions on their faces. If one castigates the government for stifling the peaceful protests in Rabat, they keep their lips sealed. What is patriotism? Is it remembering one’s home country only when one of its teams scores a goal and not when its citizens are going through hard times calling for their denied human rights? The truth about our home country is undesired by so many of us. If one discusses corruption, very few people show their patriotism.

If one touches upon social injustice, very few try to be patriotic. If one speaks out against our deplorable educational system, very few evince their glimmerings of patriotism. If one mentions the phenomenon of pedophilia, sexual abuse, countless traffic accidents, and soaring prices of foodstuffs, very few demonstrate patriotism. However, if a Moroccan team crushes a foreign team, the majority of Moroccans take to the street, say that they love their country and show all signs of patriotism. Is it through football we grow patriotic? I do not think so.

Every time I tell my fellow Moroccans a truth about our country, they criticize me, saying that Morocco is not as I have delineated it. I have been to the outskirts of Zagora, Mhamid Ghizlane, Ouarzazate, Talouine, Tata, and Tafraout and I know how the vast majority of Moroccans lead their lives. We are not yet in the position to glorify our football. America does not glorify soccer. Israel and China do not either. Do they lack the means to do so?  Of course not! Those who glorify football, such as Spain, Germany, England, Australia, Russia and others have at least developed their countries in other fields, particularly the infrastructure of their state. It is good to recognize our football players. But, how about recognizing our scientists, futurologists, bright students, teachers, doctors, physicists, professors, engineers, and masons?

China built and set up statues on some of its squares recognizing Chinese refuse workers, while Morocco has built an image in Moroccans minds that Raja football players have brought Morocco victory. What victory? Victory of development and catching up with developed countries? If Moroccan football achieved my expectations at least from time to time, I would celebrate its achievements. Since I am sure that Raja team’s success is merely a once-in-a-blue-moon achievement for us in general and for the Royal federation of football in particular, I would rather think about other things that would benefit my home country. Not celebrating Raja team does not necessarily mean that I abhor football or that I lack patriotism.

I would simply prefer to be told the truth about my country even though it makes me cry. I have grown used to shedding tears for my country, for I passionately love it. Enough is enough of telling each other lies! They keep us smiling today, but on the following day, we wake up only to find that Morocco remains where it has been for a long time despite the fact that the Raja team reached the Championship final. We wake up only to find that Morocco has not made any remarkable strides in development despite the Raja team’s latest victory.  Let us tell one another the truth and make ourselves cry instead of telling one another lies and making ourselves smile. Let us try honesty and see if it will help our country move forward!