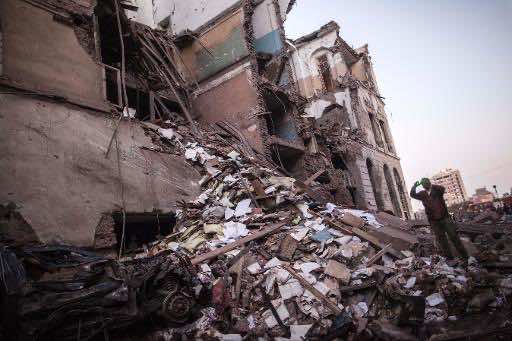 Mansoura — A powerful car bomb tore through an Egyptian police headquarters Tuesday, killing at least 14 people, in an attack the military-installed authorities said is aimed at derailing a democratic transition.

Hours after the bombing in Mansoura, a city north of Cairo, prime minister Hazem Beblawi labelled the Muslim Brotherhood, the banned movement of ousted president Mohamed Morsi, a “terrorist” group, though the premier did not blame the organisation for the blast.

The movement itself strongly condemned the attack, one of the deadliest in Egypt since the military deposed Morsi in July.

The bombing comes just weeks ahead of a referendum on a new constitution billed as the first major step towards democracy after the Islamist leader’s overthrow.

The bomb ripped through the multi-storey police headquarters in Mansoura shortly after 1:00 am, killing at least 14 people and wounding more than 100, officials said.

“The majority of the casualties are from the police,” said Omar al-Shawatsi, the governor of Daqahleya, of which Mansoura is the capital.

Daqahleya security chief Sami El-Mihi was wounded in the blast and two of his aides were killed, security officials said.

The massive explosion — whose impact was felt about 20 kilometres (21 miles) away — stripped off the facade of the building and caused part of its solid structure to cave in.

The wreckage of an armoured police car was nearby, while at least 10 civilian cars were damaged and a nearby building completely collapsed, said an AFP correspondent at the scene.

Angry residents of the area vented their fury on Morsi’s Brotherhood movement.

“The Muslim Brotherhood is an international terrorist organisation. They are responsible for what happened in Mansoura,” said Hamada Arafat, a school teacher.

Prosecutors and officials say the Brotherhood has links with Islamist militants who have stepped up attacks on security forces across Egypt, but mainly in the restive Sinai Peninsula.

“This is a more sophisticated attack than previous ones. It could be a sign of things to come… the insurgency in Sinai is becoming emboldened and extending attacks outside the Sinai,” said Shadi Hamid, research director at the Brookings Doha Center.

Beblawi said the bombing was an attempt to thwart the country’s steps towards democracy, and declared the Brotherhood a terrorist group.

The declaration could have significant political impact ahead of the referendum, but will not have much legal impact as the group has already been banned by an Egyptian court.

In a separate statement carried by MENA, Beblawi later said: “Terrorism will not succeed in derailing the implementation of the road map”, but did not mention the Brotherhood by name.

Interior minister Mohamed Ibrahim visited the site of the blast and told reporters Egypt “will not be scared, on the contrary it will reinforce our determination to fight the terrorists”.

The Brotherhood condemned the bombing “in the strongest possible terms”, and also lashed out at Beblawi.

“It is no surprise that Beblawi, the military junta’s puppet prime minister, has decided to exploit the blood of innocent Egyptians through inflammatory statements designed to create further violence, chaos and instability,” it said in a statement.

The 85-year-old Brotherhood, a political and social movement, prevailed in a series of polls following the overthrow of longtime dictator Hosni Mubarak in 2011, and Morsi became the country’s first freely elected leader after winning elections last year.

But since his ouster Egypt has been caught in a spiral of violence.

He was removed from power after massive street protests against his turbulent one-year rule, with millions accusing him of power-grabbing and economic mismanagement.

More than 1,000 people have since been killed in a crackdown, including hundreds on August 14 in Cairo when police stormed two protest camps of his Islamist supporters.

The crackdown has seen thousands of Islamists, including the Brotherhood’s entire leadership, arrested.

After Morsi’s ouster, the military-installed authorities announced a road map for a democratic transition.

On January 14 and 15 the country is to hold a constitutional referendum — the first step in the plan.

The charter, if approved, is to be followed by parliamentary and presidential elections by mid-2014.