ANKARA  - Nearly one million people face Christmas without electricity, with thousands of flights delayed and hundreds canceled in the US 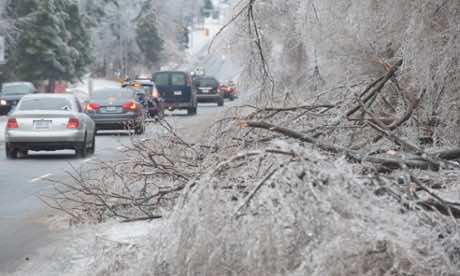 ANKARA  – Nearly one million people face Christmas without electricity, with thousands of flights delayed and hundreds canceled in the US

At least 15 people were killed as storms, icy rains and floods hit parts of the US and Canada on the Christmas Eve, leaving nearly one million people without electricity.

Canada Mayor Rob Ford called it “one of the worst ice storms to hit the city,” while the governor of New York Andrew Cuomo has declared emergency in his state.

At least ten deaths in the US were blamed on the storm, including five people killed in flooding in Kentucky and a woman who died after a tornado with winds of 130 mph struck in Arkansas. Five people were killed in Canada in highway accidents related to the storm.

Falling trees cut electric lines, plunging almost half a million into darkness on Monday in southeastern Canada and around 450,000 in Michigan, New York State and New England. They may face a Christmas without electricity.

Hospitals in Toronto are now working on emergency power generators. Energy companies are struggling with the consequences of the icy rain, hoping to restore the electricity supplies by Christmas.

More than 400 flights were canceled at Toronto’s Pearson International Airport, with dozens more scrapped in Ottawa and Montreal. The storm left up to 30 millimeters (1.2 inches) of ice in the Toronto area and may dump as much as 10 millimeters in southeastern Quebec, according to the official weather agency Environment Canada.

In the US, more than 4,000 flights were behind schedule, the majority of which were in New York, Washington, Chicago, Denver, Dallas and Houston, along with 275 canceled flights, said aviation data company FlightAware.

The winter weather was far from nationwide, though. Record-high temperatures were registered in some Mid-Atlantic states this weekend, but forecasts warned of drops back to the mid-30s.