Mansoura — Angry Egyptians standing on piles of debris and shattered glass pointed the finger of blame at the Muslim Brotherhood after a car bomb ripped through Mansoura's police headquarters on Tuesday. 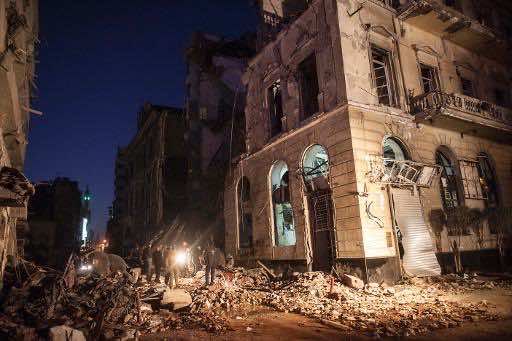 Mansoura — Angry Egyptians standing on piles of debris and shattered glass pointed the finger of blame at the Muslim Brotherhood after a car bomb ripped through Mansoura’s police headquarters on Tuesday.

“The people want the execution of the Muslim Brotherhood,” shouted residents amid the wreckage of burnt-out cars and collapsed walls left by the pre-dawn blast, which peeled off a section of the building.

Twelve policemen and a civilian died in the attack and more than 100 people were wounded.

At a nearby hospital, the floor of the emergency room was slick with blood as medics rushed in casualties.

Mostafa Hadi, a policemen who survived the attack, said the blast sent him flying through the air moments after he had left the safety of his armoured truck outside the headquarters.

“I heard a massive explosion behind me. I flew through glass and wreckage and then lost consciousness,” he said from his stretcher, his head swathed in a bandages.

Egypt has been deeply polarised since the military ousted Islamist president Mohamed Morsi, who belongs to the Muslim Brotherhood, with regular clashes between his supporters and opponents.

The military-installed government that took office after the ouster of Morsi has launched a crackdown on his supporters, mainly from the Brotherhood, that has left more than 1,000 people dead and thousands arrested.

And it was at the Brotherhood that residents of Mansoura, a Nile Delta city north of Cairo, vented their anger over Tuesday’s attack.

“The Muslim Brotherhood wants to come to power in any way, by shedding blood, using force or by destruction,” Wael Hamdy, 50, told an AFP correspondent at the site of the blast. 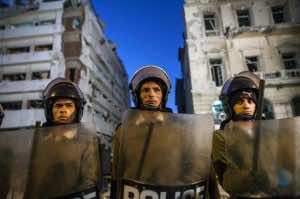 The 85-year-old Islamist movement prevailed in a series of polls following the overthrow of longtime dictator Hosni Mubarak in 2011, bringing to power Morsi as Egypt’s first freely elected leader.

Tuesday’s explosion was massive and caused a part of the police headquarters to cave in.

Its impact was felt around 20 kilometres (12 miles) away and it shattered windows of nearby buildings.

The facade of the police headquarters had been ripped off, and charred and mangled vehicles could be seen amid the debris of collapsed walls of nearby buildings.

Bulldozers were deployed to clear the streets of the debris — wrecked cars, iron bars and slabs of concrete.

Dozens of policemen wearing helmets and brandishing shields took up positions around the blast site, cordoning off the headquarters and keeping angry residents away.

“The people, the army and the police are together,” shouted the crowds.

“We will teach them good manners, we will show the Muslim Brotherhood what real anger is,” they chanted, behind them the municipal building and a theatre that also bore the brunt of the attack.

Later on Tuesday, thousands turned out for the funeral of the victims, whose corpses, shrouded in white and Egyptian flags, were carried on fire engines that edged through the chanting crowds.

“The Brotherhood is targeting us, but these operations will only increase our determination to avenge our colleagues,” said policeman Tamer Husseini.

A Brotherhood statement condemned the bombing in the “strongest possible terms.”

For residents whose homes were shaken by the impact of the blast in the middle of the night, it was clear who was behind the attack.

“Such an attack is in no one’s interest except the Muslim Brotherhood,” said Mervat Said, a lawyer.

“They are taking revenge against the people and the police,” she said.

Another resident choked with anger as she branded the Brotherhood “our enemies.”

“Any one who knows a Muslim Brotherhood member should report about him (to the authorities). They are terrorists,” said Hanem Hassan.

A little further from the blast site, traders were distraught at the sight of their shops destroyed by the blast.

The Brotherhood has been a target of a deadly crackdown launched by the authorities since Morsi’s ouster.

Thousands of its supporters, including the top leadership, have been arrested.

But the Islamist movement continues to stage protests against the authorities, demanding Morsi’s reinstatement.

“Starting from today, they won’t be able to hold any more demonstrations,” said Mohamed Tag, a youngster from Mansoura.

“We will take care of them.”