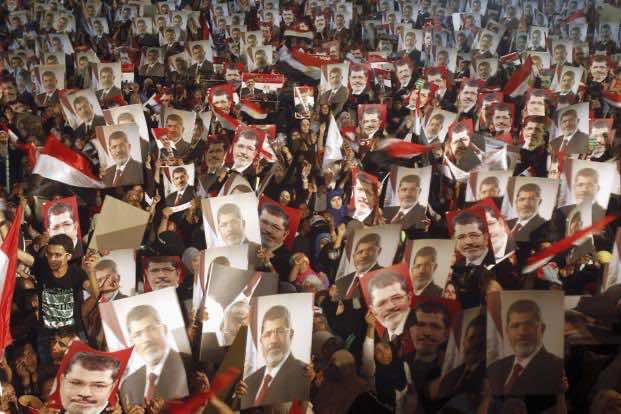 A Muslim Brotherhood leader lambasted the “drastic” decision and vowed the movement would keep up its protests across Egypt, despite the move which is unprecedented for the 85-year-old movement.

The decision is likely to accelerate a crackdown on the movement that has killed more than 1,000 people, mostly Islamists, in street clashes and seen thousands imprisoned since Morsi’s overthrow by the military in July.

It lumps together Al-Qaeda-inspired militants who have killed scores of policemen and soldiers with the more moderate Brotherhood movement, although authorities have provided no proof the groups are related.

The announcement comes a day after a suicide car bombing of a police station killed 15 people, in an attack condemned by the Brotherhood and claimed by an Al-Qaeda-inspired group based in the restive Sinai Peninsula.

“All of Egypt was horrified by the ugly crime committed by the Muslim Brotherhood on Tuesday morning, when it blew up the Daqhaleya police headquarters,” the cabinet said in a statement.

“The government has decided to declare the Muslim Brotherhood movement a terrorist organisation,” it said, referring to terrorism clauses in the country’s penal code.

“Members who continue to belong to this group or organisation following the release of this statement will be punished according to the law,” said the statement.

The Brotherhood has condemned Tuesday’s powerful bomb attack in the city of Mansoura, north of Cairo.

One of the few senior leaders of the Brotherhood to have avoided prison told AFP the Islamists would continue with their protests.

“The protests will continue, certainly,” said Ibrahim Munir, a member of the group’s executive council who is in exile in London, adding the move was “illegitimate”.

“This is an attempt to frame the Brotherhood.”

Morsi’s supporters, who continue to organise near-daily demonstrations demanding his reinstatement, insist they are committed to peaceful protest.

But their demonstrations have dwindled in size due to the security crackdown, and civilian opponents who oppose the Islamists often attack the rallies.

Social solidarity minister Ahmed al-Borei said at a news conference that the government would ban all the Brotherhood’s activities, including “protests”.

Morsi, now on trial for various charges, remains a deeply divisive figure in Egypt following his overthrow on July 3, after millions took to the streets demanding his resignation.

Egypt’s first democratically elected president, he ruled for one turbulent year and now stands accused of incitement to kill protesters and colluding with militants to carry out attacks in the country.

The cabinet had come under increasing pressure to declare the Brotherhood a terrorist group following Tuesday’s bombing.

“Egypt enveloped in sadness… and the government waffles,” read the front page banner of the state-owned Al-Ahram newspaper on Wednesday.

An Al-Qaeda-inspired group spearheading attacks in Sinai had earlier claimed responsibility for the suicide car bombing of the Mansoura police headquarters.

The group, Ansar Beit al-Maqdis, had previously claimed several high profile attacks since Morsi’s overthrow, including a September assassination attempt against the interior minister with a car bomb outside his home.

“Your brothers in Ansar Beit al-Maqdis, with the grace of God, were able to target the Daqhaleya police headquarters,” the group said in a statement posted on jihadist Internet forums.

The group which is composed mostly of Egyptian Bedouin has been critical of the Brotherhood’s style of political Islam and advocates armed attacks.

Morsi and the Brotherhood’s leadership face trial on charges of colluding with militant groups, including the Palestinian Hamas movement, to launch “terrorist” attacks in Egypt.

He is also accused of involvement in attacks on police stations and prisons during the 2011 uprising that toppled Hosni Mubarak.

Morsi and other Islamists imprisoned by Mubarak had escaped during mass jail breaks authorities now say were part of a wider plot to destabilise the country.