Morocco World News
Home Opinion Op-Eds Is It Enough for Maliki in Iraq?

CAIRO - As the world celebrates Christmas within few days, the Iraqis are still looking forward to what 2014 will hold for them. The Iraq’s parliamentary elections draw near as scheduled in March 2014 and many analysts question the chances of Iraqi Prime Minister Nouri al-Maliki to win a third term in office. 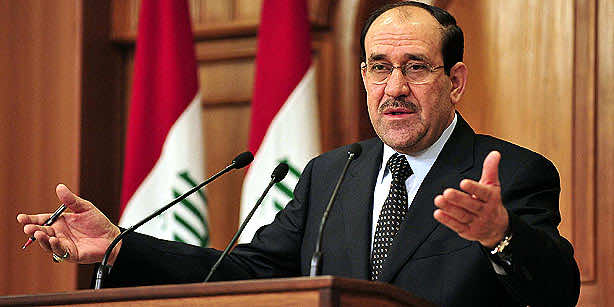 CAIRO – As the world celebrates Christmas within few days, the Iraqis are still looking forward to what 2014 will hold for them. The Iraq’s parliamentary elections draw near as scheduled in March 2014 and many analysts question the chances of Iraqi Prime Minister Nouri al-Maliki to win a third term in office.

Following the withdrawal of American military forces from Iraq in December 2011, it put an end to 8 years of war that cost millions of lives and billions of dollars. Though the situation was stabilized relatively after that, especially in 2012, 2013 carries many things ominous for the Iraqis and the Middle East.

Iraqi Prime Minister Nouri al-Maliki fired hundreds of intelligence and security officials to replace them with less capable political loyalists, say U.S. State Department cables from early 2010 according to the Atlantic. So Iraq lacks professional experienced cadres that can stabilize the war-torn country. More than 5,700 people have been killed in Iraq in 2013, nearly double the total for all of 2012.

The UN Assistance Commission to Iraq reported that in 2013, there has been about 68 car bombings a month and a multiple-location strike every 10 days. The most shocking one is the detonation of 15 car bombs in a capital city with dozens of resultant deaths last July. In addition, the Iraqi government has put more focus on the Al-Qaeda militias as many Sunni insurgents feeling depressed and marginalized operate independently of the Al-Qaeda to disturb the Shia rule in Iraq to attract the attention of the Iraqi government and the international community.

Over the last few years, the Iraqi government has stirred up conflict with the Sunni, the second largest denomination of Islam in Iraq. Sunni leader Tariq al-Hashemi, Iraqi Vice-President who fled Iraq after authorities accused him of running a death squad, was sentenced to death. Meanwhile, Prime minister Maliki has made use of  de-Baathification  as a weapon to deprive the Sunnis from being empowered to hold the senior positions in the state apparatuses especially the military and the police.

In 2010, Iraqi President Jalal Talabani expressed his doubts about the decision of the election committee to ban about 500 candidates from being electing office. “We asked in an official letter to judge Madhat al-Mahmoud (president of the Iraqi Supreme Court) that he rule on the legality of the integrity and accountability committee.” Al Arabiya News reported that Iraqi Prime Minister Nouri al-Maliki has said last Friday “Karbala must be the Qibla of the Islamic world because Imam Hussein [the Prophet Mohammad’s second grandson, and an important figure in Shia Islam] is buried there,” though the Sunni and Shia Muslims agree that the Qaaba in Mecca, Saudi Arabia, is the only Qibla for all of them.

Recently, Maliki has visited the USA for endorsing him for another term in the Iraq leadership and providing aid to fight the Al-Qaeda in Iraq, requesting reconnaissance drones, Hellfire missiles, Apache helicopters, and intelligence advice from the Obama Administration. “It’s hard for the administration to make any claims that things have gone well inside Iraq,” said Brian Katulis, a senior fellow and expert on Iraq at the Center for American Progress. “But the blame for that falls largely on Iraq’s leadership,” reported The New York Times.

Moreover, the support of Maliki at home seems waning. In 2012, the Kurdish parties and Mr. Sadr’s allies had made an attempt in the parliament to campaign for vote of no confidence against the Iraqi prime minister, but under the Iranian pressures, he escaped it. In addition, in the provincial elections held last April, his State of Law list won 22%, down from 28% in 2009, but it also lost control of key provincial councils like Baghdad and Basra as other Shia political powers withdrew their support for Maliki. Only three of 16 elected State of Law councillors were firmly associated with the prime minister in his former stronghold Basra. Decreasing support for the Iraqi government has resulted mainly from violence and its failure to fight corruption endemic in the state.

“The corruption is unbelievable,” says Ghassan al-Atiyyah, a political scientist and activist. “You can’t get a job in the army or the government unless you pay; you can’t even get out of prison unless you pay. Maybe a judge sets you free but you must pay for the paperwork, otherwise you stay there. Even if you are free you may be captured by some officer who paid $10,000 to $50,000 for his job and needs to get the money back.”

Finally, from time to time, the controversy over the oil between Baghdad and Erbil (the capital of Iraqi Kurdistan) has risen as a result of disagreement over the oil contracts between the self-administered Kurdistan and the foreign oil companies as the new pipeline to export the Kurdistan oil to Turkey which will be connected to Kirkuk-Ceyhan line is near completion; thus depriving the federal government from revenues sharing with oil transferred through the al-Qiyas station, which is operated by Baghdad.