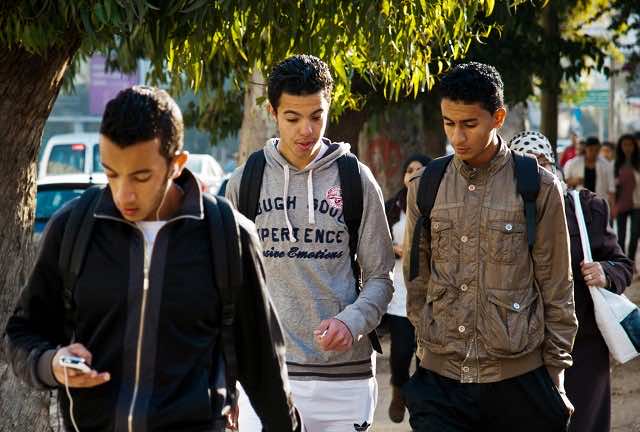 Rabat – Arab countries suffer from the highest youth unemployment rate in the world. One in five people are 15 to 24 years old. However, one in four young people currently looking for employment is jobless.

In Egypt, the youth unemployment rate has reached 34%. Tunisia, invests 7% of gross domestic product in education but many of the young university graduates are taking to the streets to express their content as their chances of finding a job continue to be slim.

The resulting mass youth joblessness is considered a main contributing reason to the revolutions across the Middle East and North Africa. I think that the turbulence sweeping across the region  is the best thing to provoke meaningful change in the  education systems throughout the Arab world.

That is to say that Arab higher educational systems are facing some serious challenges as demand grows for a better qualified and more flexible workforce in an increasingly complex and dynamic world. In order to provide some potential answers to these concerns, this paper asks the following questions:

-What is the role of Arab higher educational systems in achieving development and spreading human rights culture?

-What are the main barriers that Arab higher educational systems face?

-How can these barriers be most effectively overcome?

In the examination of the first question it is helpful to remember the old Chinese proverb which says: “the beginning of wisdom is to call things by their right name”. To speak of the role of Arab higher educational systems in the achievement of human development and spreading human rights values, calls first for the definition of the expression “human development and its relationship to human rights.” “Human development and human rights are close enough in motivation and concern to be compatible and congruous, and they are different enough in strategy and design to supplement each other fruitfully,” according to the Human Development Report from 2000.

Human rights and development both aim to promote well-being and freedom, based on the inherent dignity and equality of all people. The concern of human development is the realization by all of basic freedoms, such as having the choice to meet bodily requirements or to escape preventable disease. It also includes enabling opportunities, such as those given by schooling, equality guarantees and a functioning justice system. The human rights framework shares these concerns.

We all feel comfortable and convinced that real development is the one undertaken by man. Without him, there wouldn’t be any development. It seems to me that development is a global process that interferes with diverse institutions and social organizations. The educational and training systems are among the most important social institutions. It has a direct impact on the manner of development. In short, Arab states which hope to accomplish real development must endure a necessary step; that is the reviewing of its learning programs and the setting up of a clear relationship between learning and development.

Besides, statistical analysis, case studies, and empirical observation all point to the fundamental parts of higher education. One of them is offering higher training and a second one is making scientific research available to society. In other words, the university see to using education and scientific research in its pursuit of the global development of the civilization of society. This also inherently benefits groups of people who remain outside the framework of the university.

According to this, sense means an extension of the mission of the university whose raison d’être is to preserve knowledge, stressing the following course of action:

Thus, and with regards to this vision of things, the university should see to the fulfillment of the following objectives:

-Consider the university as an institution for research and study.

-Improve the mental capacities of students and their competence and encourage their capacity for  innovation by means of dialogue and discussion between teachers and students within small groups.

-Encourage practical and scientific studies because they constitute the instruments of development.

Spreading the Seeds of Human Rights

Human rights education is nothing new. “The World Conference on Human Rights considers human rights education, training and public information essential for the promotion and achievement of stable and harmonious relations among communities and for fostering mutual understanding, tolerance and peace.” I strongly believe that human rights occupy a central role in providing durable peace, stability and development to societies. I also think that Arab universities ought to play a significant role in building this peace and stability in their own societies and in developing their communities.

Knowledge and understanding of human rights are crucial elements of human dignity, for we cannot demand our rights unless we know about them. It is impossible for individuals or groups to claim rights without a basic knowledge of these rights. This is a first move. In practice, human rights are gained through processes of struggle. For this motive, part of human rights education needs to engage with such struggles. The development of learning individual and collective narratives about rights can be empowering, since it enables learners to see themselves and others not as the victims of exclusion, discrimination and abuse, but as actors engaged in struggles for justice.

According to the slogan of the Vienna World Conference on Human Rights of 1993: ‘Human Rights for All’. In order to grasp this theme, it is necessary to promote ways of spreading the message. The challenges of developing human rights and preventing human rights violations have to be met through human rights education, learning and training.

In fact, education has a complicated and crucial role to play in upholding human rights, supporting human development and promoting civil society.

Human rights education teaches young people how and why various cultures must interact in order to promote cross cultural dialogue, respect, and peaceful coexistence. At the same time, the awareness of the immense diversity of human existence, transforms individuals answerable for their acts either at personal or societal level.

-The knowledge of human rights would also pilot youth to institute an orderly, peaceful, and friendly society both in the international and national spheres.

-It develops the knowledge, skills, and values of human rights.

-It develops the socio-psychological, human personality.

-It helps people and policy makers to evolve the ways and means to overcome the problems of each nation and that of the international community.

-It helps to foster understanding, tolerance, gender equality and develops friendship among all nations while also battling discrimination and intolerance along racial, ethnic, religious, and linguistic lines.

These advantages are not automatic. They are connected to the nature of institutional systems and as well as to the broader social, political, and economic systems within which they are situated.

In order to recruit and retain the best teachers, governments should give priority to an adequate salary, which must provide teachers with a reasonable standard of living for themselves and for their families, as well as the means of enhancing their professional qualifications by developing their knowledge and improving their cultural resources. Governments must also focus on providing attractive working conditions including small class sizes, career paths and more opportunities for professional growth and development, financial and other incentives.

Therefore, governments should issue clear policies and give the subject special attention, while also working towards implementing it through training the police and security forces, teachers, clergymen, judges and public servants.

The university is a common heritage of humanity which has been constantly evolving during the last five centuries in Europe. Arabs were late in noticing the existing infrastructure and founding new universities with a terrible delay. They undertook the creation of universities in an imitative way without preparing the necessary human element, exaggerating their interest for the technocratic model. All this without providing the necessary conditions for training philosophers, historians, jurists, and experts whose obvious importance concerning the building up of civilized society increase daily.

The experiment of higher education in Arab countries has been disappointing to date. Its input to social and economic development has not mirrored other accomplishments in Arab countries. The signs of this failure are most obvious when judged by international standards as demanded by the emerging world economy. Poor educational quality, a dearth of significant contributions to knowledge, and a failure to advance the public interest are all too common.

These evils will not cure themselves. They must be confronted now, and aggressively. If they aren’t Arab countries will miss out on the powerful boost higher education can give to development and will face more and more daunting obstacles to system amelioration.

In general, the role of universities in development is important. Arab universities are the light of life and of hope because they make the right choices: they have the power to lay out the road to change for a better order of things. This presupposes the training of the Arab man who inherits the fundamental traits of his nation and who embodies the values of the Arab-Islamic personality.

In order to achieve its goal, the university should have freedom of research and speech in order to keep political and ideological influences away, it is an academic freedom that could not be regarded as a privilege of the elite scholars; it’s rather, according to the LIMA declaration of 1988 (freedom of the members of the academic community individually and collectively to seek knowledge, develop and transmit it through investigation, discussions ,innovation ,diffusion…) in order for this freedom not to be understood as an escape from any coercion, it is necessary to reach an agreement on its significance that the leaders pledge to respect.

Society needs independent thinkers. Leaders cannot be powered by storage batteries, they must generate their own power. We often forget that the object of education is not to impart information, so that the student becomes a repository for knowledge. The object of education is to train and develop the mind for the sake of critical awareness. This is one of the key means of developing the social and economic welfare of a country.

In sum, it is necessary to recognize that development needs and concerns for equality should go hand in hand. Any level of material growth will not drive human happiness unless it values human life and provides the conditions for fuller achievement of the human potential. Human beings are both a subject and an object of development. The Arab world has a duty in the promotion and enforcement of rights and has to envision a rights-based approach to development. Decidedly these obligations, when they are carried out, will lead to more balanced human development. A Human rights oriented education will include all these components.