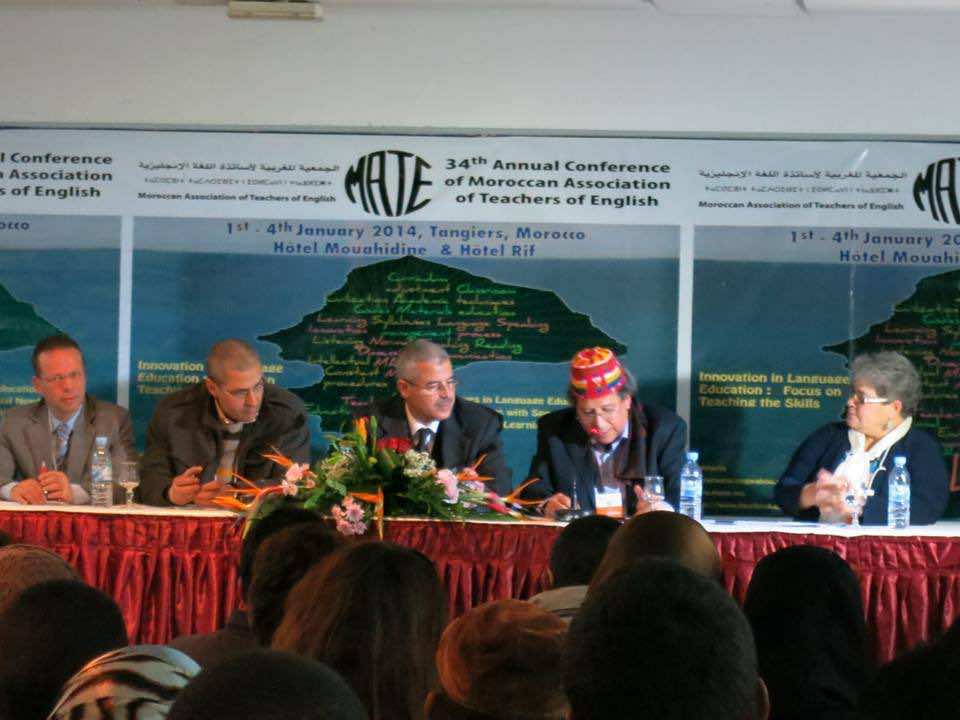 Tangier- The city of Tangier hosted the Moroccan Association of Teachers of English for its 34th annual conference on January 1-4, 2014 under the theme of ‘’ Innovation in Language Education: Focus on teaching the skills’’.  This edition also introduced a new branch, entitled  “Issues in Language Education for Learners with Special Needs: Focus on Learning Difficulties’’.

The first day of the conference was marked by the presence of the Tangiers delegate, representing the Minister of National Education, who was unable to attend because of health issues.

The delegate read the Minster’s  letter to participants where he congratulated them for choosing the issue of innovation in teaching: ‘’I would congratulate you for choosing the topic of innovation in language teaching,  which goes in parallel with the revolution of  educational  and technological revolution that Morocco is witnessing’’  said the minster’s letter. He also praised the initiative of shedding light on the issue of educating students with special needs.

‘’ Your topic goes hand in hand with the project of the ministry that cares for students with special needs, as officials have joined  efforts to provide special rooms and train teachers to deal with these kind of students, the Minister added.’’

The president of MATE, Mr. Abdelatif Zaki, argued for the necessity of choosing the topic of innovation. He pointed out that educational systems are currently challenged and shaken by rapid changes in all aspects of life.

The keynotes of the first day highlighted innovation in language education: educational requirements vs. practical considerations delivered by one of the pioneers of ELT in Morocco, Mr. Mohamed Melouk.  The second keynote speech was given by the Egyptian/English educational specialist Gad Elbihiri and tackled the issue of dyslexia in English.

The second day started with a keynote speech titled “Language and Development” by Abdelmajid Bouzian. Many other topics were presented and discussed like  “Innovative institutions start with innovative individuals” presented by Abdelatif Zaki  and “Assessment for Learning: The place of backward planning of units of work,”  by the MATE’s former president Noureddine Bendouqi.

In the afternoon, many workshops and MATE’s Special Interest Groups took place. There were ten workshops altogether. Some examples include Miss. Rachida Guelzim ‘s workshop “Are you an innovative teacher?”; Delia Dunlap from the USA helped teachers with her lecture  “Promoting Collaborative Learning through English Clubs.”  Concerning Special Interest Groups, the first one  emphasized special needs students.  The second one was focused on writing and debating projects. The last one featured the introduction of the famous MATE’s Spelling Bee.

Morocco World News correspondent in the Sahara and English teacher Rachid Khoya spoke about the seven key characteristics of effective teachers. Lots of other presentations were given such as Laura McWilliams’ fascinating talk entitled “Using Innovative Technology to stimulate Learner Engagement in Extended Writing.”

The afternoon was again devoted to workshops, and it primarily featured a review of the basics like student and teacher resources presented by Paul Harvey and Jihane  Benmassoud’s workshop on communicative activities to promote speaking in an EFL classroom. Concerning Special Interest Group, the organization continued with MATE’s Spelling Bee, and it also gathered Spelling Bee teachers & coordinators.

On the last day of the conference, teachers continued to present different topics such as  “Integrating the Web in ELT”  by Mahjoub Hanen  and Saïd  Khalid’s “Teaching grammar with music: the case of phrasal verbs.”

The conference ended with MATE’s “Assemblée Générale extraordinaire” dedicated to the amendment of the constitution and closing remarks.