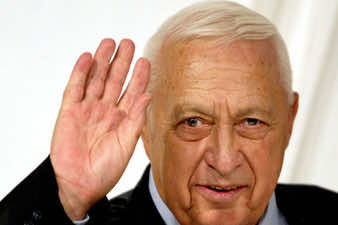 Former Prime Minister of Israel Ariel Sharon died on Saturday in hospital where he spent the last eight years in coma.

Israeli radio announced that Sharon, 85, died in Tel Hashomer hospital, in company of his family during his last minutes.

The first statement came from Israeli President Shimon Peres after his death. “Arik [Sharon’s nick-name] was a brave soldier and a daring leader who loved his nation and his nation loved him,” he said in a statement sent by his office.

“He knew how to take difficult decisions and implement them. We all loved him and he will be greatly missed. I send my condolences to the Sharon family, may he rest in peace.”

Sharon slipped into a coma after a cerebral hemorrhage in 2006. Sharon was diagnosed with a renal failure last month after his condition deteriorated and he was being kept in intensive care unit.

– Who is Ariel Sharon?

Ariel Sharon was born in 1928 in Palestine, when it was under British colony, and his actions on the battlefield and later in the political arena made him one of Israel’s most controversial figures.

As a young man, he joined the Haganah, the underground military organization of Israel in its pre-state days, and fought in the Arab-Israeli war of 1948-49.

In the 1950s, he led a team of Special Forces, called Unit 101 whose mission was instilling terror by the infliction of discriminate, murderous violence not only on fighters but on women, children and elderly people too.

Sharon’s unit 101 attacked the Jordanian village of Qibya in October 1953, killing dozens of civilians. He fought almost in all of Israel’s wars and earned a reputation as a “gleeful killer” in the Muslim world.

In the 1956 Suez War, he was a commander of a paratroopers’ brigade and rose to the rank of major general. Sharon also commanded a division in Sinai where he succeeded against the Egyptian army in the war of June 1967.

Sharon was elected to the Israeli parliament (Knesset) as an MP of the new right-wing Likud party in 1973, but resigned the following year to serve as a security adviser to Yitzhak Rabin.

As housing minister in the early 1990s, he was a staunch supporter of Israeli settlers, presiding over the biggest building drive in Jewish settlements in the West Bank and Gaza since Israel occupied the territories in 1967.

Robert Fisk, one of the first journalists to be present at the scene of the horrific murders in Sabra and Shatilla, described it as “war crime” in his book “Pity the Nation”:

“When does a killing become an outrage? When does an atrocity become a massacre? Or, put another way, how many killings make a massacre? Thirty? A hundred? Three hundred? When is a massacre not a massacre? When the figures are too low? Or when the massacre is carried out by Israel’s friends rather than Israel’s enemies?”

The Sabra and Shatila massacres filled the world with hatred towards Sharon, despite being elected prime minister in 2001 by Israelis, serving until his incapacitation led to the end of his tenure in 2006.