Cairo — Official results are due Saturday of an Egyptian referendum billed as a popular endorsement of president Mohamed Morsi's overthrow, with tensions high following deadly clashes between his Islamist supporters and police. 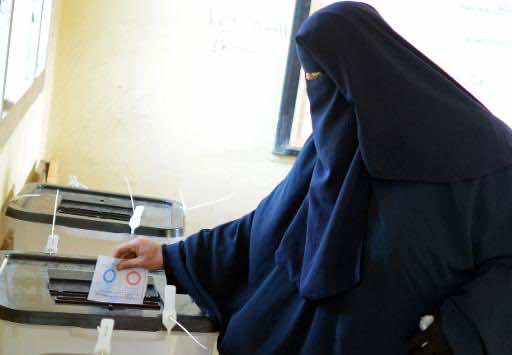 Cairo — Official results are due Saturday of an Egyptian referendum billed as a popular endorsement of president Mohamed Morsi’s overthrow, with tensions high following deadly clashes between his Islamist supporters and police.

At least three people were killed in the clashes Friday, as Morsi supporters faced off with tear gas- firing police in several cities, security officials said.

The interim authorities trumpeted the Tuesday-Wednesday poll as a chance for voters to show their support for the army’s overthrow in July, after massive street protests, of Egypt’s first freely elected president.

Flagship state-owned daily Al-Ahram hailed a 98 percent vote in support of the new charter drafted to replace the Islamist-inspired one adopted under Morsi in 2012.

The Islamists, who boycotted the vote, described it as a farce and predicted it would culminate in the sort of massive electoral fraud that characterised Hosni Mubarak’s three-decade rule, ended by the Arab Spring uprising of 2011.

Two men were killed in Cairo and another in clashes in Fayoum, southwest of the capital Friday, the health ministry said, as police clamped down in what has become a weekly ritual in a massive crackdown on pro-Morsi protests.

In Cairo’s Alf Maskan area, demonstrators aimed fire works at police, who scattered for cover when they heard bursts of automatic gunfire from the protesters’ side. A policeman fired an assault rifle in the protesters’ direction.

The interior ministry said police arrested 123 suspected protesters in Cairo and other cities.

The government hoped that a large turnout among Egypt’s 53 million registered voters would bolster its democratic credentials and further marginalise the Islamists.

Preliminary tallies reported by state news agency MENA suggested turnout had reached 39 percent in most provinces, sharply up on 33 percent registered in the Morsi-era referendum just over a year ago.

Army chief Abdel Fattah al-Sisi, the man who toppled Morsi, was closely monitoring the turnout as an indicator of support for a presidential bid later this year, military officials said.

The government said the vote showed support for Morsi’s overthrow.

“This was also a referendum on June 30,” said government spokesman Hany Salah, referring to the day when millions of protesters took to the streets demanding that the president resign.

The run-up to the vote was marred by arrests of activists who campaigned against the constitution.

“There was no real opportunity for those opposed to the government?s roadmap or the proposed constitution to dissent,” said monitoring group Democracy International, which observed the referendum.

The group said its monitors witnessed security forces and campaigning material inside polling stations, but there was “no evidence that such problems substantially affected the outcome of this referendum.”

The government will still have to contend with near daily protests and a militant campaign in the restive Sinai that has killed scores of policemen and soldiers.

For the second time in a month, suspected militants in the restive peninsula blew up Friday a gas pipeline that feeds into an industrial zone.

The Islamist opposition scorned the figures put out by state media and called for mass demonstrations on January 25 — the third anniversary of Mubarak’s overthrow.

“Let the putschists deceive themselves and hold fools’ celebrations,” it said, claiming the referendum was a throwback to rigged elections under Mubarak.

The US administration is closely watching the results of Egypt’s referendum, but has not yet decided whether to unfreeze some $1.5 billion (1.1 billion euros) in aid, the State Department said Thursday.

Washington suspended part of its aid — the bulk of it military — in October, angered that there had been little indication of a return to democracy after Morsi’s overthrow.

“There are a range of factors we look to,” State Department spokeswoman Jen Psaki said in Washington, adding that merely holding the referendum was not enough.

The vote has put the Islamists on the back foot, and gives the government even less incentive to negotiate with the Muslim Brotherhood, which it has designated as a “terrorist” group.

Morsi himself has been in custody since his ouster and is currently standing trial in the first of three separate cases against him.

Morocco’s Constitutional Court: How Does it Work?