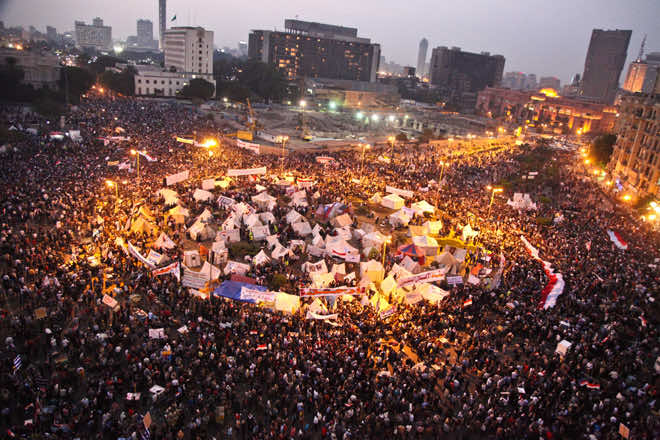 As the clock ticks toward the third anniversary of the January revolution, Egypt’s political rivals are racing to seize control of Cairo’s Tahrir Square, the epicenter of the 2011 revolution that ended the autocracy of longstanding president Hosni Mubarak.

The iconic square was the gathering points of 18 days of mass protests that started on January 25, 2011 and put an end to Mubarak’s 30-year rule.

But this year’s anniversary of the revolution comes amid deep polarization in the Arab world’s most populous state following the military ouster of elected president Mohamed Morsi in July.

The National Alliance for the Defense of Legitimacy, a coalition of groups that call for Morsi’s reinstatement, has called for mass rallies in Tahrir and main squares on the revolution anniversary.

“We are coordinating among youth, revolutionary and political groups to mark the anniversary in Tahrir and main squares,” Diaa al-Sawi, spokesman for the pro-Morsi “Youth against Coup” movement, told Anadolu Agency.

“This day will be the start of the end of the military coup,” he said.

The iconic square, which was the epicenter of the 2011 uprising that toppled long-serving president Hosni Mubarak, has been a no-go area for pro-democracy protesters since the ouster of Morsi on July 3.

More than 50 people were killed on October 6 when Morsi supporters tried to march on the Tahrir Square during celebrations of a 1973 military victory over Israel.

“We have no other alternative but to enter the Tahrir Square on the revolution anniversary,” al-Sawi said.

Backers of the military have also called for rallies in Tahrir Square to pile pressures on the army chief Gen. Abdel-Fattah al-Sisi to run in the country’s upcoming presidential election, expected this year.

These calls have gained momentum following a referendum on a revised constitution, which unofficial results show that the sweeping majority of voters had voted in favor.

The vote results, which are scheduled to be officially announced on Saturday, have given ammunition for al-Sisi supporters to call mass rallies in Tahrir to call for him to run for president.

Interior Minister Mohamed Ibrahim has also called for Egyptians to converge on Tahrir Square to “abort plots orchestrated by the “terrorist” Muslim Brotherhood.

“The Brotherhood have plans to storm the Tahrir Square and trigger chaos on the revolution anniversary,” Ibrahim told a private channel on Wednesday.

Last month, the government designated the Muslim Brotherhood, from which Morsi hails, as a “terrorist” group following an attack at a security headquarters in the Nile Delta city of Mansoura that killed 16 people.

The government blamed the attack on the Brotherhood, which vehemently denied any involvement.

Ahmed al-Fadali, the general coordinator of the Independence Current, which backs the military, shared the same view, calling on Egyptians to converge on Tahrir on January 25 to call on al-Sisi to run for president.

Opponents of both the military and the Muslim Brotherhood have also vowed to converge on Tahrir Square on the revolution anniversary.

“We will converge on the Tahrir Square, no matter what,” the Ahrar movement said in a statement.

The calls come amid reports that “sovereign institutions” have expressed concern over the reemergence of former members of Mubarak’s now-defunct National Democratic Party (NDP).