MONTREUX, Switzerland - Syria peace conference opens under cloud of tens of thousands of photos that appear to show systematic torture by regime. 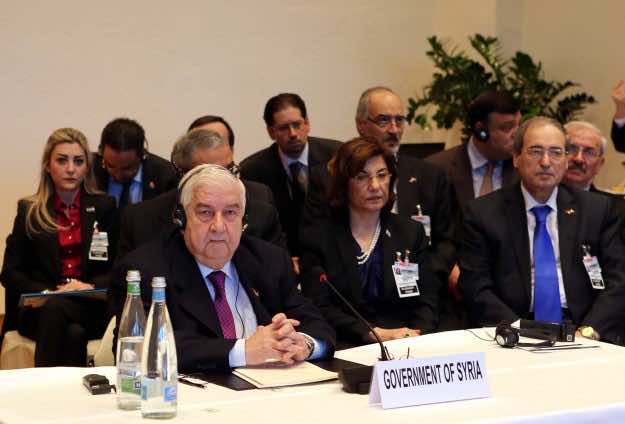 MONTREUX, Switzerland – Syria peace conference opens under cloud of tens of thousands of photos that appear to show systematic torture by regime.

Representatives of the Syrian regime and opposition cast blame at one another at an international peace conference on Syria convened Wednesday in Switzerland under the cloud of tens of thousands of photos that appear to reveal systematic torture by the regime of Bashar al-Assad.

“After nearly three painful years of conflict and suffering in Syria, today is a day of fragile but real hope,” Ban said. But he noted that more than 100,000 people had been killed in Syria while 2.3 million others were driven from their homes.

Representatives of about 40 countries and several international organizations participate in the conference to find a political solution to the Syrian civil war.

Like Ban, Russian Foreign Minister Sergei Lavrov expressed optimism that participants could reach a solution. Emphasizing the necessity of national dialogue, he warned of the need to prevent terrorism and an “alien culture” from spreading in Syria.

Syria must be maintained as a sovereign secular state, Lavrov said.

US Secretary of State John Kerry condemned the Assad regime for its treatment of the Syrian people and expressed disgust at the photographs, which appear to show the corpses of people killed by torture.

“The right to lead the country does not come from torture,” Kerry said. Assad, he said, “cannot be part of the transitional government.”

But Syrian Foreign Minister Walid Muallem focused on terrorism, claiming that people of 83 different nationalities are now fighting in Syria, and by accusing the opposition of violations such as treason, looting and espionage.

When informed by Ban that his speech had exceeded the time limit, he responded by saying, “I have right to give the Syrian version.”

“No one in the world has a right to give legitimacy to, or withdraw it from Syrian government but the Syrian people,” Muallem said. Any terms agreed to in the conference would be put to a referendum in Syria, he added.

“Syria’s opposition only brought shame to the country by begging the US for a military operation,” Muallem added.

“Defending ourselves with weapons was not our choice,” he said, “It is a choice which was imposed by the Syrian regime.” He also held the Syrian army responsible for the deaths of 10,000 children, while accusing the media of a smear campaign, against the opposition.

World leaders have expressed hope that the 55,000 photographs of war crimes against 11,000 detainees, published Monday alongside a forensic report, would have a positive impact on negotiations.