CAIRO – In a statement, the National Alliance for the Defense of Legitimacy said the upcoming "wave," set to start Friday, would have eight objectives. 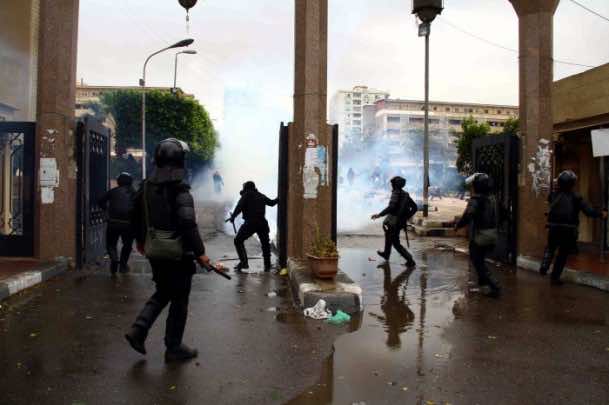 CAIRO – In a statement, the National Alliance for the Defense of Legitimacy said the upcoming “wave,” set to start Friday, would have eight objectives.

A major pro-democracy alliance has called on Egyptians to launch an 18-day “revolutionary wave,” starting on the eve of the third anniversary of the January 25 2011 uprising that ended longstanding autocrat Hosni Mubarak’s 30-year rule.

In a statement, the National Alliance for the Defense of Legitimacy said the upcoming “wave,” set to start Friday, would have eight objectives.

Among these objectives, the statement read, are an end to Egypt’s current state of military rule; retribution for protesters killed since the 2011 uprising; the release of all political prisoners; the purge of state institutions of corrupt officials; and a definitive end to what the group describes as a reconstituted Mubarak regime.

Millions of Egyptians took to the streets for 18 days in January and February of 2011 to demand that Mubarak step down, which he eventually did on February 11.

Earlier Wednesday, the alliance said that the uprising anniversary, which will fall on Saturday, should be accompanied by “general mobilization.”

The alliance also urged supporters to join mass protests starting Friday and converge on public squares in Cairo and Alexandria, including Cairo’s iconic Tahrir Square – the epicenter of the 18-day uprising against Mubarak.

Imam Youssef, a senior member of the Salafist Asala Party (an affiliate of the pro-democracy alliance), said the planned protests were aimed at “overturning the military coup,” a reference to the army’s July 3 ouster of elected president Mohamed Morsi.

Pro-army activists, meanwhile, are also planning to mark the occasion with mass rallies.

Activists opposed to both the Muslim Brotherhood and the military, for their part, also plan to stage protests on the occasion.