CAIRO - Egypt marks the third anniversary Saturday of the uprising that drove dictator Hosni Mubarak from power, but a heavy-handed crackdown following the army's ouster of his successor, Mohamed Morsi, is raising fears that the repression of the old regime is returning. 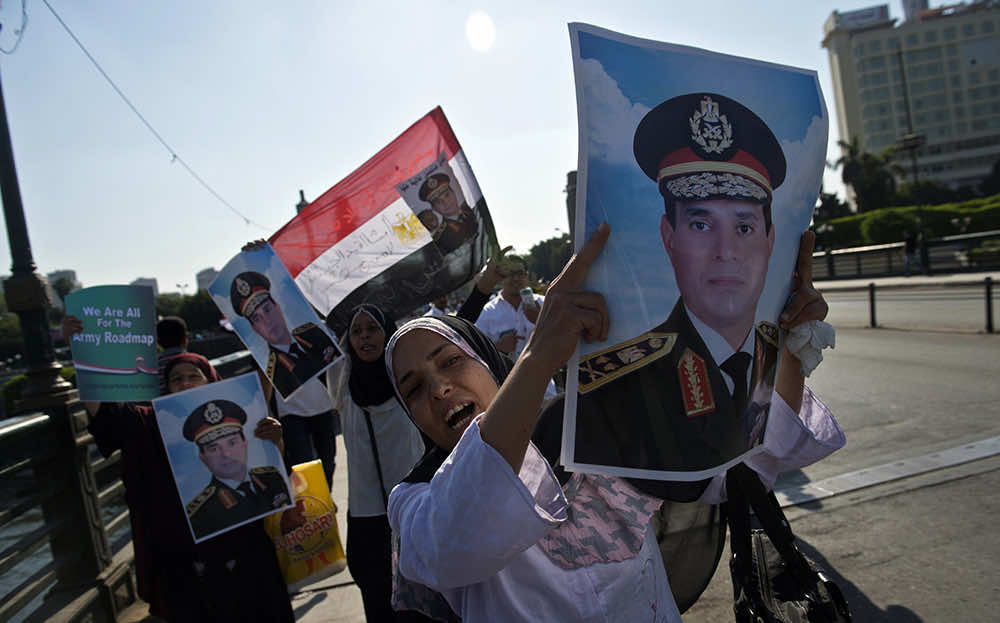 CAIRO – Egypt marks the third anniversary Saturday of the uprising that drove dictator Hosni Mubarak from power, but a heavy-handed crackdown following the army’s ouster of his successor, Mohamed Morsi, is raising fears that the repression of the old regime is returning.

After the military’s July removal of Morsi, an Islamist who was Egypt’s first freely elected president, the new regime jailed him and suppressed his Muslim Brotherhood in a bloody campaign that has killed more than 1,000 people in street clashes and put thousands more in jail.

It has also turned its sights on protests by liberals and secularists who were the driving force behind the uprising against Mubarak.

Public opinion has shifted so much that Interior Minister Mohamed Ibrahim called for celebrations and rallies on January 25, chosen by the anti-Mubarak protesters three years ago to start their protests because it fell on Police Day.

Following a year of tumultuous rule, Morsi and the Brotherhood have become the arch villains, even being blamed for crimes during the 2011 uprising.

In a televised speech on Thursday to mark January 25, Ibrahim praised the uprising but accused the “treasonous” Brotherhood of “pouncing on the people’s revolution.”

The speech was attended by interim president Adly Mansour and army chief Abdel Fattah al-Sisi, who overthrew Morsi and is expected to announce plans to stand for the presidency in elections later this year.

The minister vowed to “strike with all force the elements of violence and terrorism.”

Stability in the country has been shaken, with regular protests by Morsi’s supporters often descending into deadly violence with his opponents and police.

At the same time, a campaign by insurgents in the largely lawless Sinai peninsula has killed dozens of members of the security forces.

Activists say the long-hated interior ministry has been given carte blanche to clamp down on dissent, with a security apparatus run amok and arresting dissidents who were icons of the 2011 uprising.

Michael Hanna, an expert on Egypt with The Century Foundation think tank, said “formerly discredited elements of the old regime capitalised on the post-Mubarak transition, particularly the stewardship of the Muslim Brotherhood.”

“Not only have they been rehabilitated, they are now ascendant,” he said of the interior ministry, which runs the police and was influential at almost every level of the state at the height of its power under Mubarak.

The police virtually withdrew from the streets during the 2011 uprising, adding to the chaotic situation, and crime rates soared.

But they are now back in full force, with previously disbanded secret police divisions reconstructed by Ibrahim.

Police, armed with the new law restricting protests, have cracked down on rallies that had not received prior approval.

Amnesty International says “the Egyptian authorities are using every resource at their disposal to quash dissent and trample on human rights.”

The fallout from such tactics appears to have concerned even Sisi, who attended a celebration at the police academy Thursday and listened with a poker face as the interior minister praised him.

Sisi does not want the country’s youth to feel that the old regime is back, government and military officials say. After a low youth turnout in a constitutional referendum this month, the interim authorities have begun reaching out to young activists.

Some of those activists object to how their 2011 uprising is now widely portrayed in the media and by police as an Islamist plot to target the state.

Mona Seif, a prominent democracy activist and Abdel Fattah’s sister, said “there is manipulation by the interior ministry, and former faces of the old regime of Mubarak, widely aided by the media, to make it sound like the Muslim Brotherhood were responsible for every major crime of 2011.”

Seif, like many youth leaders involved in the uprising, had fiercely opposed Morsi’s rule, but now criticise the interim government’s tactics.

“At the end, reality has a way of coming back,” said Wael Khalil, another prominent activist from the uprising.

The interior ministry itself has said it no longer violates human rights, and conducts arrests based on prosecution orders.