Inezgane, Morocc - I think any foreigner visiting the United States cannot have a well-rounded cultural experience without attending either a baseball or basket-ball game. The feeling of discovery, enjoyment and thrill are doubled when you happen to attend matches between world renowned teams. 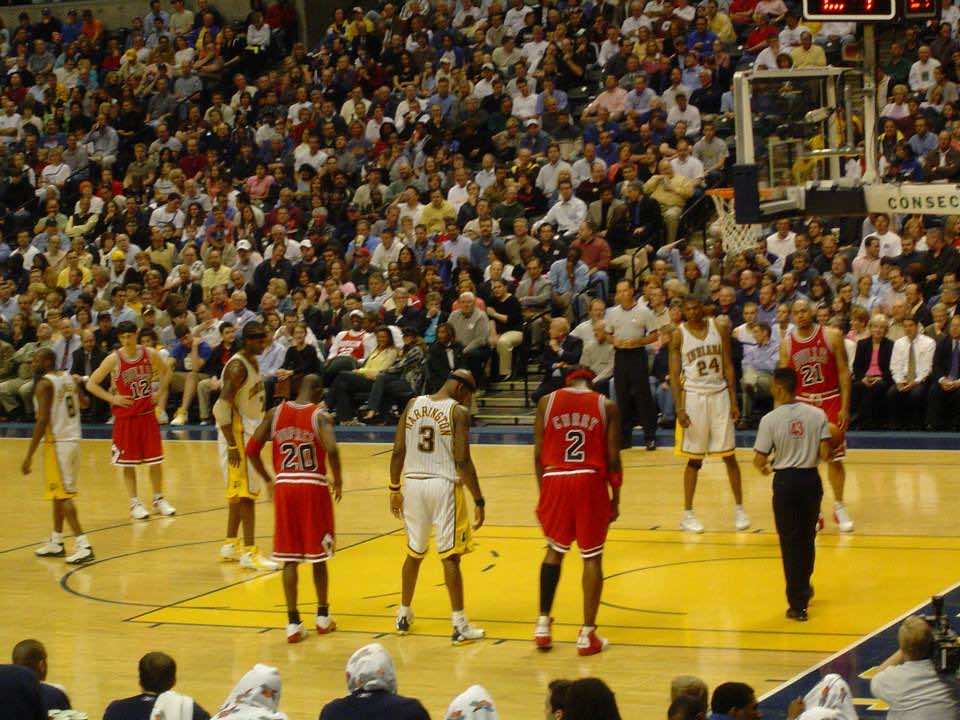 Inezgane, Morocc – I think any foreigner visiting the United States cannot have a well-rounded cultural experience without attending either a baseball or basket-ball game. The feeling of discovery, enjoyment and thrill are doubled when you happen to attend matches between world renowned teams.

While in Indianapolis, Indiana I happened to have attended a memorable basketball match between two giant American basketball teams. At the Conseco field house, the Indianapolis Pacers were “confronting” their great visitors from Chicago; the Chicago Bulls.

My American host and I arrived early that evening at the Conseco field in front of which a colorfully dressed band was performing and a multitude of fans were queening to enter the field house. Meanwhile some people who were late in getting their entrance tickets were trying to get some before the great match started. Inside the Conseco Field house, we managed to find our seats and soon the Indiana Pacemates started their dance show. According to my humble experience in the US, I can say that the US fears nothingness, emptiness and boredom hence the necessity to fill out “while getting ready time” with something nice, agreeable, and worthwhile.

The two teams soon made their appearance in the basketball field welcomed by loud cheers and great excitement from their respective fans. Giants and titans were there in that evening in an atmosphere that reminded me of tales about the great Roman gladiators. The reigning atmosphere was softened by the touch of a professional female referee added to the mix.

My background then as an English Language teacher at an athletes’ high school in Morocco allowed me to enjoy the match to the fullest. As a matter of fact because our school did not have a special library to cater for the need of future athletes, I started a project with my students to compile as much information as possible about sports. Our approach was to proceed in alphabetical order. To cut a long story short, Basketball was listed under the B entry. For each sport we included a brief historical background of the sport or game followed by its rules and regulations as well as field measurements when a field is required for that game or sport.

The Indianapolis Pacers versus the Chicago Bulls game went on and on “punctuated” with Pacemates performances all through the evening and well into the night.  I wanted to eternalize those great Basketball moments so I took a great number of shots of almost everything but I think the best shot I took was one of a sweet girl holding a cardboard on which was written “Pacers will win, that’s no bull!”. The girl was standing next to a boy who looked pretty much like her, most probably her brother, nice members of a family of Pacer fans. The game result was very hard to settle, both teams were highly professional, highly motivated and highly success oriented. At the end of the game, the little girl’s prediction came true. The Indianapolis Pacers prevailed.

To me foreigner, the result did not matter much; I enjoyed every bit of the match and went out home with a new basketball experience to add to another one I experienced in the State of New Mexico. More than three decades ago, a Soviet Union national Basketball team played against an American national one in the New Mexico University Arena within what was called “Basketball Diplomacy”. The American basketball team had the upper hand in that historical Basketball duel. That might have foreshadowed a great historical event that was going to take place some years later; the failure of the Soviet “empire” to prevail and hence the new world order that ensued.

The little girl’s message was not a prediction but rather a wish. In 1977 I knew a multitude of Americans who wished “the empire of evil” would get fragmented and disbanded but on the other hand, there were those who set wishful thinking aside and worked tirelessly to turn that wish into reality. That was a different game of giants versus titans the end result of which revealed some of them had feet made of clay.