Morocco World News
Home Culture Casablanca in one day: feel the spirit of the city

Casablanca - As a Couch Surfer and the author of 'Bewildered in Morocco' I receive numerous messages from people from different countries who face the same problem: they come to Morocco but they have only one, maximum two days in Casablanca. 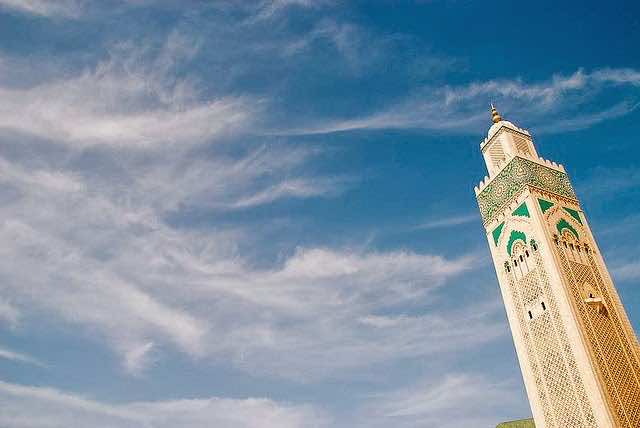 Casablanca – As a Couch Surfer and the author of ‘Bewildered in Morocco’ I receive numerous messages from people from different countries who face the same problem: they come to Morocco but they have only one, maximum two days in Casablanca.

Everybody thinks that this few-million city can’t be discovered in less than two weeks. If you think the same, let me assure you, you’re wrong!

Despite its huge surface there are not as many places to see as one may expect. Casablanca is the economical capital of the country and still many people have false idea about it. However, there are some places that are an undeniable “must” once you get your ass in this city! Let’s suppose that you, like majority of the travelers who text me, have only 24 hours in Casa and want to squeeze the maximum out of it and feel its spirit… 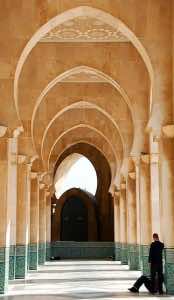 In the Morning: Hassan II Mosque and Breakfast in La Sqala

It’s the biggest mosque in Morocco and 7th biggest mosque in the world! Every single part of it has been done with attention to detail. When I first stood in front of it I was speechless. Its size and the decorations are so impressive! If you’re travelling by taxi simply tell the driver “Hassan II mosquée” and he’ll take you there.

For the breakfast I recommend you to go to the nearby restaurant, La Sqala. It is a place held in oriental style and with a very nice atmosphere. You may try the Moroccan specialty harcha (kind of a flat pastry made from semolina) with jam or msmen (a delicious but heavy, few-layer pancake) with cream cheese.

A glass of sweet mint tea is an integral element of the Moroccan breakfast! Having chosen this for your first meal you can be sure that you’ll be stuffed and full of energy for at least a couple of hours!

Before the Noon: Get Lost in the Old Medina

Old Medina is a walkable distance from the restaurant. In Morocco, every city has its medina. Casablanca couldn’t be an exception! If you want to buy some leather goods, babouche and some other Moroccan must-haves, you should devote 1-2 hours to see this place. Beware! Bargaining is aninseparable part of shopping in this part of the world. 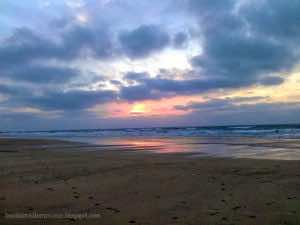 In the Afternoon: Walk on the Beach Near Anfa Place

Anfa Place is a very modern shopping center by the Atlantic Ocean. It is located almost on the beach! There is a very nice promenade leading from the mall to the beach. I suggest you go there before the sunset.

The views from the beach are breathtaking. You can see the lighthouse and admire the sunset in all its glory! The most beautiful photos of sunsets I got- have been taken just there.

In the Evening: Eat Camel for a Dinner

Camel is quite cheap here but it is not the most popular meat. When I first ate it I was sure it was well prepared, spicy beef. How surprised I was when I found out it was actually camel’s meat! For MAD 25  you can eat delicious tajine that comes with a home-baked bread, olives in harrisa and a glass of sugary, mint tea.

My absolutely number one snack is in Maarif district of Casablanca. It is called “Ibil” and is located on Jura street. Don’t miss that, in Europe it is not likely to find a bar that would serve you a camel; no forks allowed! Help yourself with bread.

At Night: Party in Ain Diab

Ain Diab is the party district of Casablanca. During the weekend you can go to some crazy parties, just like the ones in the European capitals. You will have hundreds of clubs and pubs to choose from. From folkchaabi places, to African ones to European ones.

This is the end of our 24-hour tour around Casablanca. If you have any questions don’t hesitate to ask. Suggestion? Welcome to share! Note that this is my subjective selection of the best places in Casa!