TUNIS - Tunisia celebrated Friday the adoption of a new constitution three years after the revolution, a landmark in getting its troubled transition back on track and hailed as a model by foreign leaders. 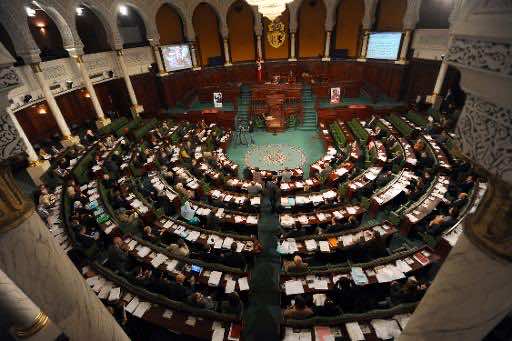 TUNIS – Tunisia celebrated Friday the adoption of a new constitution three years after the revolution, a landmark in getting its troubled transition back on track and hailed as a model by foreign leaders.

A symbolic ceremony at the national assembly, where the constitution was adopted on January 26, burnished Tunisia’s positive image in contrast with other Arab Spring nations such as Libya and Egypt that remain plagued by instability and political turmoil.

The charter is widely regarded as being the most progressive in the region.

French President Francois Hollande, the only European head of state attending the ceremony, hailed it as an example for other countries.

“The constitution honours your revolution and is an example for other countries to follow,” he told the packed chamber, including the premiers of Algeria and Kuwait and the presidents of Chad, Gabon, Guinea and Mauritania.

“It confirms what I had said (when I visited) in July, that Islam is compatible with democracy.”

“This constitution that we are celebrating today is a hope and an example for other countries,” he said.

The constitution was forged during two years of acrimonious debate, amid deep divisions and mistrust between the Islamist party Ennahda then in power and the largely secular opposition, aggravated by sporadic jihadist violence rocking the country.

Friday’s ceremony comes a day after the first anniversary of the assassination by suspected jihadists of Chokri Belaid, a prominent leftist politician and virulent critic of Ennahda.

The slain politician’s family continues to demand clarity on the circumstances of his death, despite the killing of his alleged assassin, Kamel Gadhgadhi, in a police shootout earlier this week.

Leftwing political parties were to meet later Friday to commemorate Belaid’s death, after a candlelit vigil in central Tunis on Thursday evening, and with a large demonstration planned for Saturday.

The political assassination, the first of two last year, triggered massive anti-government protests and a crisis from which Tunisia has only now started to emerge, with the adoption of a consensus constitution and the Ennahda-led government’s replacement by a technocrat administration.

Mehdi Jomaa, the new prime minister, hailed the charter’s adoption but warned that it “should not make us forget the importance of the challenges to come”.

“We are committed to completing the process and preparing for free and fair elections,” he added of the parliamentary and presidential polls he is tasked with organising later this year.

The new constitution is a compromise that reduces the prominence of Islam — which is not mentioned as a source of legislation but is recognised as the nation’s religion — and cites the objective of bringing about gender parity in elected institutions.

Executive power is divided between the prime minister, who will have the dominant role, and the president, who retains important prerogatives, notably in defence and foreign affairs.

Before Friday’s ceremony, the presidency said in a comment posted on its Facebook page that “the world is celebrating the constitution with Tunisia”.

Imed Daimi, the head of President Moncef Marzouki’s political party, called on the country’s allies to help the Tunisian economy.

Foreign officials have “come to share in our joy and support the Tunisian experience… We want this political support to translate into economic support,” he said.