Taroudant - On the eve of the Sochi 2014 Winter Olympics to be held in Russia from Feb 7-23, Google has showed its support for gays  with a rainbow colored doodle. 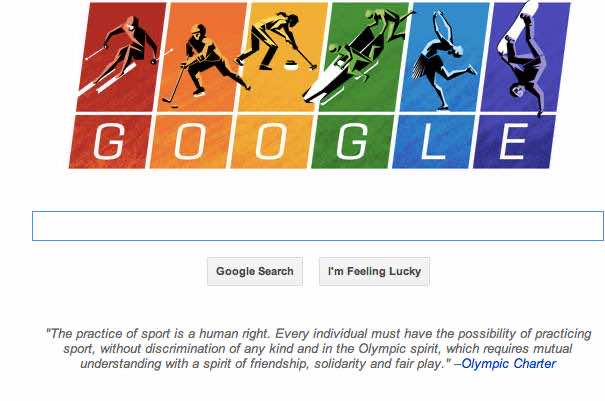 By
Larbi Arbaoui
-
Larbi is a freelance writer and assistant editor at Morocco World News.
Feb 7, 2014

Taroudant – On the eve of the Sochi 2014 Winter Olympics to be held in Russia from Feb 7-23, Google has showed its support for gays  with a rainbow colored doodle.

Google has updated its home page with a rainbow-colored Olympic-themed version of its iconic logo, showcasing a range of Olympic winter sports, which is understood as a clear sign of solidarity with lesbian, gay, bisexual, and transgender  (LGBT) Russians.

Clicking on the logo leads to the Google search page.

Below the logo, Google homepage quotes the Olympic Charter as follows:

“The practice of sport is a human right. Every individual must have the possibility of practising sport, without discrimination of any kind and in the Olympic spirit, which requires mutual understanding with a spirit of friendship, solidarity and fair play.”

“Google has once again proven itself to be a true corporate leader for equality,” said Griffin.

Google, the most world visited website, often changes its logo to celebrate the world’s events and also to show support for debatable issues.

A video posted on YouTube in recent days shows a group of Russian lashing out at homosexuals. The video, which was shared widely on social media stirred an uproar worldwide.