By Muhammad A. Chetouani - Dubai 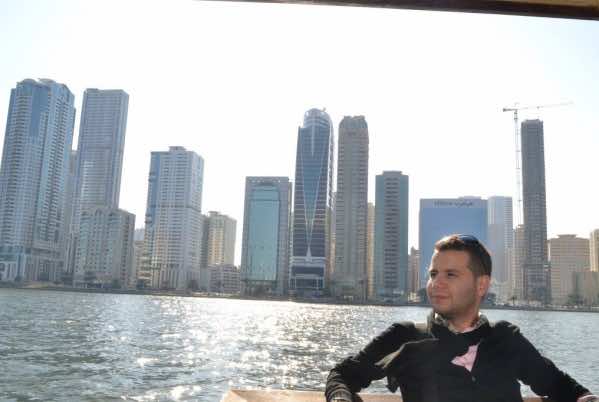 By Muhammad A. Chetouani – Dubai

As usual, I start my day with a very strong and bitter cup of coffee. I sip it with careful tenderness as if I want to stop time while relishing its inordinate taste.

After I sober up from the intake of caffeine, I realize that, like every morning, I am late for work. Thus starts my legendary race against the clock. I hurry up, I run, I jump, I undress myself like superman when beckoned to help, and I dress up as quickly as a soldier who is awakened by alarm whistles and the deafening whir of planes. I race up flights of stairs, skipping two or three stairs at once.

I make all this effort in order to end up with the same unworthy morning routine. The majority of hotel guests are still asleep while the scatterings of early birds are certainly being taken care of by hardworking receptionists. Putting observations aside, I move on with the morning. A morning is not complete without coffee, and a coffee is not complete without reading.

This morning, I looked for my Pakistani friend who, on a daily basis, provides me with a bundle of national and international newspapers to probe and skim. However, I was told that my friend did not come to work, so I decided to find the newspapers by myself and I started singing them a song: Oh newspapers, here I am, all humble, knocking at your door; would you step out and generously hand me your news.

In my lyrical search for reading material, I found a hard-working boy with non-stop Merrakshi jokes. He was the keeper of my long-pursued aim, the prized information that I sought. I collected as much as I could of national and international newspapers. I took a seat in one of the offices at the back of the building and I started swiftly flipping through the pages of UAE newspapers.

I am quite accustomed to skipping the political news, which is different from the information contained in Moroccan newspapers. Emeriti newspapers mainly revolve around national economic growth and the prosperity of Emirati citizens as well as the accomplishments of Sisi, the hero who is leading a ferocious campaign against ‘terrorists’ in Egypt. Skipping these exhausted subjects, I moved directly to cultural and sports news. I took a look at the cultural supplement of the most popular newspaper in the gulf, Ittihad. I was surprised at the sight of the name of my professor, Dr. Khalid Amine, at the top of the front-page headlines. The sight took me aback even though I already knew that he had been to the UAE to chair the Arabic theater festival in Sharjah.

I remembered promising him a visit, a promise I did not keep due to the limitations of my job. Yet I was not expecting to see his interview on the front page of a cultural supplement in the most widely read newspaper in the Middle East. What specifically caught my attention was the simple presentation of his biography, which mentioned his birthplace, Tetouan, a place where he continues to work as a university professor.

I read the interview and I discovered that it contained an exhaustive critical analysis of Arab and international theater. The interviewer, Mahmud Abdu Allah, gloriously exhibited the achievements and publications of Dr. Khalid Amine. The journalist highlighted the fact that Khalid Amine is a worldwide specialist in the academic fields of drama and theater.

I devoured the interview, savoring the story of a man I know very well and whose writing style is captured in my memory. I have kept his words with me since my time in university, where I had the opportunity to read two of his books.

Though the news was a happy surprise in an otherwise monotonous my morning routine, a moment of critical thinking uncovered the thorns of this journalistic rose and ruined the euphoria I had previously felt. This critical thinking reminded me of my country’s intellectuals, thinkers and scientists. They are strangers in their own country while they enjoy freedom and recognition abroad. In Morocco these intellectuals  live like ordinary laymen and die only to be forgotten.

I thought back to an afternoon when Dr. Khalid Amine told me about his seminars and spectacular extracurricular activities. He told me that he used to spend his own money in order to make ceremonies and intellectual occasions a complete success.

Reda, the hard-working man, the teller of Merrakshi jokes, stepped into the office, interrupting my gloomy absentmindedness and began to chatter: “wait, here is a joke that has just landed from Morocco.”