Cairo — A popular Egyptian dissident leader under ousted president Mohamed Morsi said Saturday he will stand in upcoming elections, in a contest likely to pit him against army chief Abdel Fattah al-Sisi. 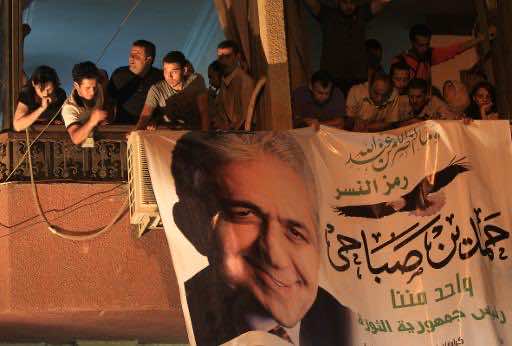 Cairo — A popular Egyptian dissident leader under ousted president Mohamed Morsi said Saturday he will stand in upcoming elections, in a contest likely to pit him against army chief Abdel Fattah al-Sisi.

Although the widely popular Sisi has yet to announce his candidacy, the field marshal is expected to contest and win the election, scheduled to be held by mid-April.

The announcement on Saturday by socialist activist Hamdeen Sabbahi, however, signals growing concern among some Egyptians over a return to military rule if Sisi wins.

Sabbahi had placed third in the 2012 elections that Morsi won.

After a year of turbulent rule Morsi was overthrown by the military following massive protests demanding the Islamist’s resignation.

Sabbahi was a leader of the National Salvation Front which organised protests under Morsi.

He was also a leading dissident against veteran strongman Hosni Mubarak, a former army man who was overthrown in an early 2011 uprising after three decades in power.

In a speech to his supporters, broadcast on live television, Sabbahi announced his nomination to chants of “our vote is for Sabbahi.”

He denounced both Morsi and Mubarak, whose regime critics say is being resurrected by the military installed government.

“We will wage a clear battle,” Sabbahi said. “I hope my decision has pleased the youths and respected their demands.”

Sisi and the interim president he appointed after overthrowing Morsi have both pledged there would be no return to Mubarak-era practices, in which thousands of political prisoners were detained and freedom of speech was stifled.

Since Morsi’s overthrow, more than 1,400 people have been killed in street clashes in a crackdown on Islamists, and thousands imprisoned.

Following a perceived low turnout among youths in a constitutional referendum last month, the government has begun to reach out to youth activists.

But some of the most prominent leaders of youth groups that spearheaded protests against both Mubarak and Morsi are now in jail.

Three of them were sentenced to three years in prison in December for participating in an unlicenced protest.