Algiers — A military aircraft crashed in Algeria's mountainous northeast on Tuesday killing all 103 people on board, a security source said, in what would be its deadliest air disaster since independence five decades ago. 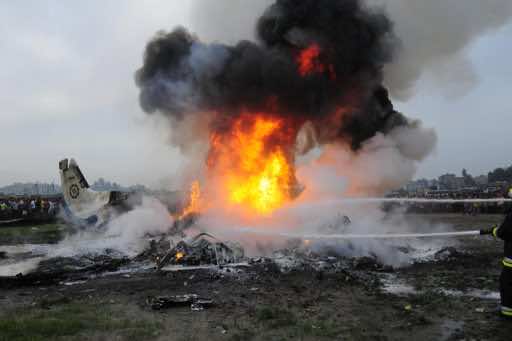 Algiers — A military aircraft crashed in Algeria’s mountainous northeast on Tuesday killing all 103 people on board, a security source said, in what would be its deadliest air disaster since independence five decades ago.

The C-130 Hercules aircraft, which was flying to the city of Constantine crashed “in poor weather conditions” in Oum El Bouaghi, some 380 kilometres (240 miles) east of the capital, Algerian radio said.

The plane was carrying 99 passengers — soldiers and their families — as well as four crew members, the source told AFP.

“There were no survivors,” the source added, although army spokesman Lahmadi Bouguern said he could not confirm that all on board had perished.

The plane was travelling from the desert garrison town of Tamanrasset in the deep south, and crashed into Mount Djebel Fertas in the Oum El Bouaghi region, official media quoted Colonel Bouguern as saying.

Preliminary reports indicated that poor weather was to blame, with heavy snow and strong winds sweeping the region in recent days.

The crash reportedly took place just as the aircraft began its descent into Constantine, when the plane lost contact with the control tower.

Military and civilian personnel were deployed for a search and rescue operation, with hospitals in Constantine and nearby Ain M’Lila placed on alert in case there were any survivors, the independent El Watan newspaper reported.

Tamanrasset, in the far south of Algeria, near the border with Mali, is the main base for the country’s southern military operations.

Extra troops and equipment have been stationed there in recent months as part of efforts to beef up surveillance of Algeria’s frontiers with Mali and Libya, following a deadly hostage-taking by Islamist militants at a desert gas plant in January last year.

The city lies 1,500 kilometres (930 miles) from Constantine, and was the site of the last major plane crash in Algeria, in March 2003.

In that disaster, an Air Algerie passenger plane crashed on take off, after one of its engines caught fire, killing all but one of 103 people aboard, among them several French nationals.

The sole survivor, a young Algerian soldier, was left in a critical condition.

A month earlier, a twin-turboprop CASA C-295 military transport aircraft, which was carrying a cargo of paper for the printing of banknotes in Algeria, crashed in southern France.

The plane was carrying five soldiers and a representative of the Algerian central bank, none of whom survived.