Oum El Bouaghi — Search teams combed the wreckage of an Algerian military plane on Wednesday for clues to why it crashed in a mountainous region killing all but one of 78 people on board. 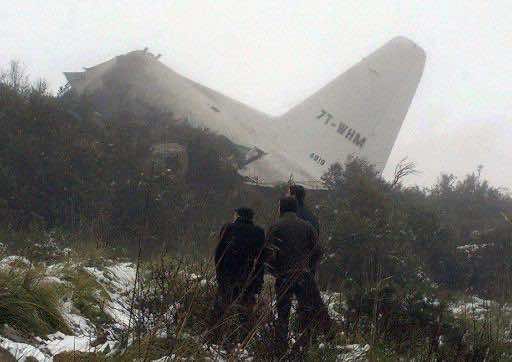 Oum El Bouaghi — Search teams combed the wreckage of an Algerian military plane on Wednesday for clues to why it crashed in a mountainous region killing all but one of 78 people on board.

Algerians began three days of national mourning after the C-130 Hercules aircraft carrying 74 passengers — soldiers and their families — and four crew came down in bad weather on Tuesday in the northeast Oum El Bouaghi region.

One survivor was found, official sources said of Algeria’s worst aviation disaster in more than 10 years.

A special unit arrived at the crash site early on Wednesday, as search teams scoured the snowy and rugged area.

“Rescue reinforcements and sniffer dog teams have begun their search,” headed by the emergency service chief Mustapha Lahbiri, a source at the scene told AFP.

The survivor, suffering from serious head injuries, was taken to the military hospital in the city of Constantine, where the plane had been headed, as were the bodies of the 77 dead.

The last body was located at 0200 GMT, the source said.

“School notebooks and military duffle bags were also visible at the site of the crash,” he said.

Colonel Lahbiri said the black box flight recorder had not yet been found, contradicting earlier reports by Algerian media that rescue teams had located one of two black boxes.

The military transport plane was flying from the desert garrison town of Tamanrasset in Algeria’s deep south to Constantine, 320 kilometres (200 miles) east of Algiers, and lost contact with the control tower as it was beginning its descent.

Algerian television broadcast images of the crash scene showing the broken carcass of the aircraft lying in a mountainous landscape, at an altitude of 1,500 metres.

“Very bad weather conditions, involving a storm and heavy snowfall, were behind the crash,” the defence ministry said in a statement on Tuesday.

“A commission of inquiry has been created and sent to the scene to determine the causes and exact circumstances of this tragic accident.”

President Abdelaziz Bouteflika announced three days of national mourning beginning on Wednesday, praising the soldiers who perished in the crash as “martyrs”.

Tamanrasset, where the flight originated, lies in Algeria’s far south near the border with Mali, and is the main base for the country’s southern military operations.

It is 1,500 kilometres from Constantine, and was the site of Algeria’s worst air disaster in March 2003, when an Air Algerie passenger plane crashed on take-off after an engine caught fire, killing 102 people on board.