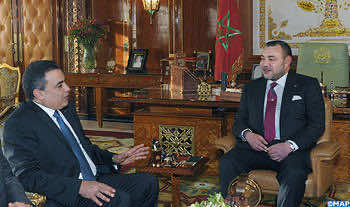 This visit, who comes few days after Jomaa took office as head of the new Tunisian government, confirms the strong ties of friendship between the two countries.

During this audience, the King asked Jomaa to convey his greetings to president of the republic Moncef Marzouki, said a statement by the royal office.

The sovereign reiterated his heartfelt congratulations to the lifeblood of Tunisia which showed in this particular juncture of the Tunisian history their strong sense of responsibility, their attachment to the virtues of compromise and their continuous concern over the preservation of the higher interests of their country. The recent adoption of the new constitution of the Tunisian republic is the perfect example.

The King confirmed Morocco’s readiness to deepen cooperation between the two brotherly countries in all areas and strengthen consultations to promote the emergence of a new Maghreb order based on the values of mutual respect, solidarity, democratic openness and liberation of energies to benefit the five Maghreb peoples.

Mehdi Jomaa expressed, on behalf of the Tunisian people and government, his sincere gratitude to His Majesty the King for the constructive commitment of the Kingdom to Tunisia’s transition to democracy and progress.

He surveyed before His Majesty the King his country’s political, economic and security situation and the objectives set by the government in consultation with the President of the Republic.

He also hailed the particular interest of the King, Commander of the Faithful, in the request by the Tunisian government to strengthen cooperation in the field of religion, mainly through the training of Tunisian Imams in Morocco, according to the precepts of the Maliki rite, which is open and tolerant.

The audience was attended by Tunisian Minister of Foreign Affairs Mounji Hamidi, the diplomatic adviser to the head of government Hatim Atta Allah and the Tunisian ambassador in Rabat Shafik Hajji.

It was also attended by Moroccan Minister of Foreign Affairs and Cooperation Salaheddine Mezouar.