New York - New governments often come into office touting their intent to be media-friendly. But such announcements are frequently followed by efforts to undermine the freedom and independence of the press for officials’ own benefit, creating an atmosphere in which journalists who refuse to succumb become targets of harassment and intimidation. 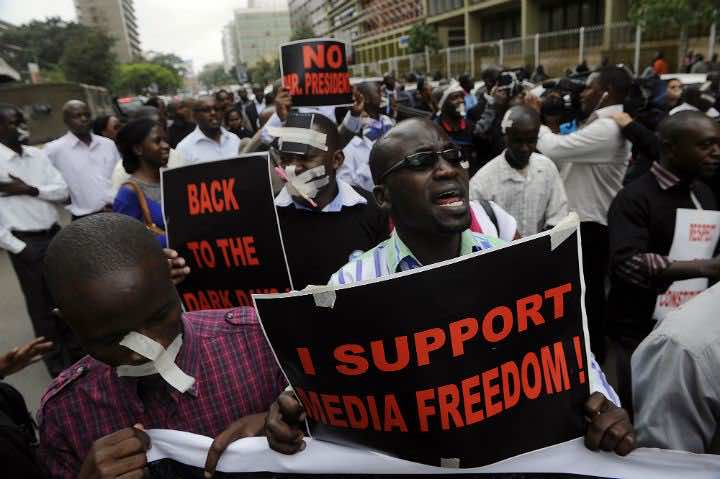 New York – New governments often come into office touting their intent to be media-friendly. But such announcements are frequently followed by efforts to undermine the freedom and independence of the press for officials’ own benefit, creating an atmosphere in which journalists who refuse to succumb become targets of harassment and intimidation.

Kenya’s President, Uhuru Kenyatta, last July invited members of the Editors Guild of that country to a media breakfast at the State House. He told journalists that “the relationship between the government and the media need not be adversarial.” Yet five months later, Kenya’s Parliament passed an anti-press legislation, the Kenya Information and Communication (Amendment) Act and the Media Council Act, a move designed to effectively silence critical reporting, says the Committee to Protect Journalists. The new anti-press freedom bill “will enable a new government-controlled regulatory board to fine journalists up to US$5,500 and media companies up to US$230,000 if the board finds them in breach of a government-dictated code of conduct …”

The Sierra Leone All People’s Congress Government came into office in 2007 promising to be the most media-friendly government the country has ever had. Notwithstanding that, journalists who are deemed to be critical of the government have come under intense scrutiny including arrests and detentions.

Law enforcement personnel, weeks ago, ransacked the offices of the Independent Observer newspaper, arrested one of its reporters and took away computers. This followed the arrests of the managing editor of Premier Media Consultancy, Julius Spencer, and the editor of his Premier News newspaper, Alusine Sesay. The police raids and arrests came after the publication of articles relating to the Information Minister, Alpha Kanu’s, dealings with some of the country’s Internet service providers.

Be it a standard democracy or not, no government should be in the good books of journalists, nor should journalists be seen establishing any such relationship with authorities. Even though journalists would have an opinion on a government, it is not their duty to express such opinion by way of performance evaluation and grading. The press, though, can report the failures and accomplishments of government or someone occupying or seeking election or re-election. This is not the same as expressing personal opinion as news reporting.

So a desire by any government or politician to entice the press is dubious. Of course, journalists must establish some contact or connection with those they report on, particularly those occupying public office, but such connections must not be extended beyond what is reported. An independent press is sure to report accurately because responsible journalists and the media organizations they represent have a standard to uphold and wouldn’t want to tarnish their credibility.

Press freedom organizations have been busy since the first week of January addressing attacks on the media and on journalists themselves in many countries. The Committee to Protect Journalists on Jan. 13 sent a letter to Adly Mahmoud Mansour, the acting President of Egypt, expressing concern about the climate of press freedom in the country and requesting the release of all journalists held behind bars.

At the start of the Syrian peace talks in Geneva last month, the Global Forum for Media Development issued a statement calling on participants to include the protection of media freedom and development of a free and independent media as central in finding a solution to the crisis in that country. Some 60 journalists have been killed and about 80 abducted since the war began in 2011.

Such organizations have reason to be concerned. In January alone four press workers were killed, three in Karachi, Pakistan, where gunmen on motorcycles shot at a TV crew, and one in Iraq, in a roadside bomb explosion in Anbar province.

Attacks on the free press have become a daily occurrence. Examples of such attacks include many countries. In the United States broad electronic surveillance programs deter government sources from speaking to journalists. In New Zealand, the government has been tracking the phone records and movement of at least one journalist following an article he wrote about probable illegal government surveillance. While in the Ukraine, at least two international journalists have been abducted, and the equipment of others damaged by government agents following a rally to protest attacks on the press. Another striking example is from Venezuela, where the government instructs Internet service providers to act as Internet police in an effort to curtail press freedom.

This article is not to decry what has become the practice of particularly in-coming governments in many parts to the world to appoint members of the press to cabinet or diplomatic positions. Many such appointees have performed diligently. Some, though, become their government’s torchbearers of attacks on the press.

With financial support from politicians, the power of the propaganda press could not be underestimated. Nonetheless, a credible independent press is what captures the public’s attention rather than government or politicians’ editorials.

When journalists allow themselves to be trapped in politicians’ structured government-media-friendly gestures, they are allowing the government to entice at least some of them into becoming its mouthpiece. By offering wayward press payroll “packages” for favorable reporting, politicians inevitably elevate themselves into directing editorial decisions.

In countries where the press struggles to operate and where some journalists are not adequately trained, such an attempt on the part of those in authority comes as a blessing. When this happens, politicians become both corrupt and complacent and pay little heed to the public’s call for accountability.

Journalists who refuse to accede to the so-called media-friendly gesture, on the other hand, are regarded as enemies of the government and the people. They are likely to face constant harassment, intimidation and detention, as well as attacks of vitriolic fabrications tweaked in lies and character assassinations by those media practitioners on the government payroll.

While officials may think otherwise, independent reporters view themselves as neither favorable nor unfavorable to government activities. They seek neither to build friendships with government officials nor act antagonistically. Their objective is merely to report the news accurately and impartially. Politicians and officeholders likewise should focus less on trying to win over journalists. Any such attempt is a recipe for journalists to go yellow and for the government to muzzle the press.