Kenitra - An old African proverb that says: “when an old man dies, a library burns to the ground.” The 14th of February witnessed the death of Mohamed Laarousi, one of the greatest pioneers of folk music and and “Taqtouta Jabaliya” in Morocco. 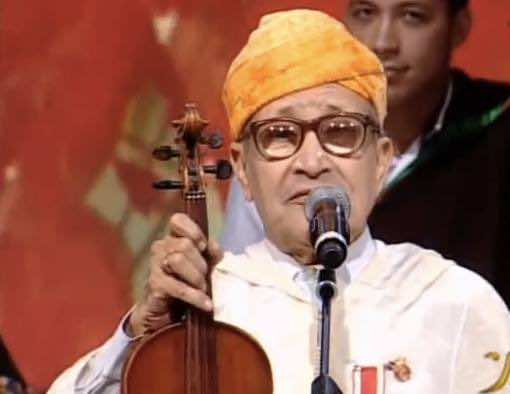 By
Aziz Qaissi
-
Aziz Qaissi is a student of English literature at Ibn-Tofail University, (Kenitra, Morocco).
Feb 15, 2014
Spread the love

Kenitra – An old African proverb that says: “when an old man dies, a library burns to the ground.” The 14th of February witnessed the death of Mohamed Laarousi, one of the greatest pioneers of folk music and and “Taqtouta Jabaliya” in Morocco.

Born on January 14th, 1934 in Fez, Mohamed Laarousi began his career at an early age as a dialectal poet, songwriter, composer and singer. His love of music made him leave the M’sid (a place where children learn Qur’an and the ABCs of Religious studies) and joined the leaders of the folklore and “Malhoun” at that time such as Moulay Lm’faddal Treref, Ahmad Balmka, and Ben Thami.

His spirit of patriotism, his love for Morocco and his struggle against colonialism were translated and echoed in his music and songs, and performed through his remarkable voice. The late Mohamed Laaroussi was considered one of the first deans of Aita also called “Taqtouta Jabaliya,” a Moroccan popular genre of music performed with traditional instruments, especially in the mountainous areas and in the north-west of the Kingdom.

The singer, who was a poet as well, delighted the ears of thousands of Moroccans through his patriotic songs. One can immediately recognize the subliminal messages his songs conveyed to boost the morale of Moroccan resistance against French and Spanish colonialism.

One of these patriotic songs one might cite here is “El- qabtan Soli” (Captain Soli), which called resistance against a French captain called Soli. Oftentimes, French protectorate authorities arrested him because of his songs.

Just after the independence of Morocco, Laarousi, was invited to broadcast his songs in the Moroccan National Radio. Later in his career, he managed to enrich the Moroccan library of Folklore and popular music with more than 526 contributions.

His music forms a very rich reference for researchers and anybody else who may be interested in “Jbala” art that thrives in many Moroccan regions such as Chefchaouen, Ouazzan, Tangier and Tetouan.

Equally interesting are some of his song-poems inspired by themes like nature in the north of Morocco, agriculture, machismo of men and cleverness of women, which contributed to further boosting the art of Aita.

Morocco, thus, shall be proud of this artist who had enriched the Moroccan popular memory with his patriotic poems and songs.

Mr. Laarousi passed away at the age of 80, after a long illness. This article is a tribute to his nationalism, art and spirit. His contribution to the diversity of Moroccan music and folklore allows him to have a place of choice among the great masters in the field.