Bordeaux - Operation "New Bridge", led by US and Italian authorities, broke up a new drug smuggling route which connected the 'Ndrangheta and New York's mafia. 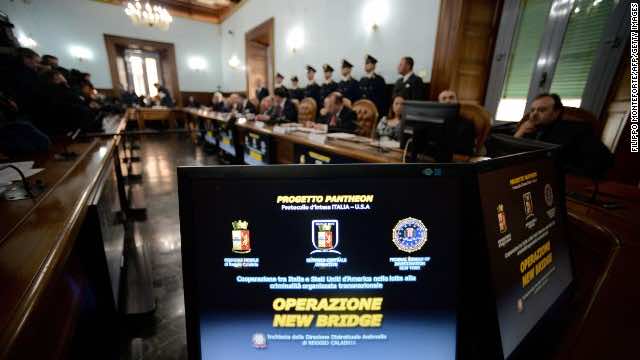 Bordeaux – Operation “New Bridge”, led by US and Italian authorities, broke up a new drug smuggling route which connected the ‘Ndrangheta and New York’s mafia.

The FBI and Italian police have been working together for 2 years in a joint operation aiming at dismantling a transatlantic network between Italy, the US, Canada and Latin America. According to the Italian police spokesman, Raffaele Grassi, 24 mafiosi have been arrested on both side of the Atlantic. 17 members of the Calabrian mafia were captured in Italy, the FBI arrested 7 men from the Gambino and Bonnano crime families in New York, and two more are still being sought.

U.S Attorney for the Eastern District of New York Loretta Lynch stated they face charges of “narcotics trafficking, money laundering and firearms offenses based, in part, on their participation in a transnational heroin and cocaine trafficking conspiracy.”

150 police officers in as many as 20 locations were involved in the Italian raids, mostly around Goia Tauro, one of the largest shipping ports in Europe through which the ‘Ndrangheta imports cocaine from Latin America. The Italian mafia and the Gambino family were planning on smuggling some 500 kg of pure cocaine from Guyana, hidden in canned fruit and provided by Latin American drug cartels. The street value of the drug was estimated at 750 million euros.

The two-year investigation started in 2012 and involved undercover agents, the interception of emails and wire taps. In 2008, a previous operation named “Old Bridge” had exposed the ties between the Cosa Nostra in the US and its counterpart in Palermo, Sicily. This new alliances sheds light on the ‘Ndrangheta’s will to expand its influence abroad by creating a bridge with American mobsters who have close ties with Mexican drug cartels.

Lynch stated the operation has “dealt a lasting blow to the ‘Ndrangheta’s efforts to gain foothold in New York”.