Nador - The term picaresque has its roots in the 16th century in Spain. Overall, the picaresque novel is a type of fiction that is characterized by being satirical and realistic at the same time. 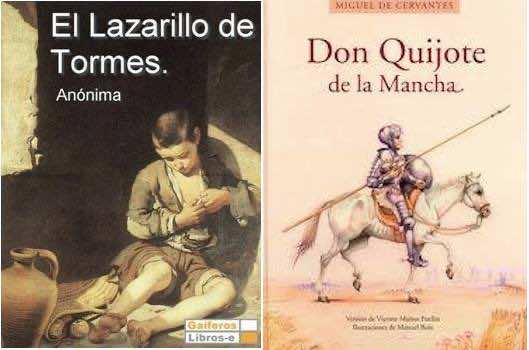 Nador – The term picaresque has its roots in the 16th century in Spain. Overall, the picaresque novel is a type of fiction that is characterized by being satirical and realistic at the same time.

This subgenre of fiction tends to shed light, with humorous detail, on the adventurous life of a rascal protagonist who belongs to a low social class in a corrupt society. This literary genre originated in 1554 in Spain when the anonymous novel entitled Lazarillo de Tormes was published. Nonetheless, in 1561 the novel was “blacklisted on the first Spanish Index because of its irreverence towards the church, but was allowed to recirculate in expurgated form from 1573.” In 1599, this genre was revived with the publication of the first part of Don Quixote in 1605, and the second part in 1615. It is important to note that the publication of these so-called picaresque novels coincided with the heyday of the Spanish Golden Age.

The Spanish Golden Age (1492-1659) is a historical period when Spain proved itself as the most successful economic power in Europe, making great contributions to the humanities. During this time, writers and poets wrote for the church, which confined their creativity through strict literary canons. Picaresque works broke with the traditional mode of art in Spain. In essence, such works came as a reaction to popular romances, with their rules of chivalry and happy endings. The picaresque novel was born at a time “when there was great surface wealth, but underneath poverty and starvation, at a time when romances were popular.” This means that picaresque works are subversive by nature, in the sense that they emerged as an alternative to the old narratives and discourses where the ‘haves’ were usually given noble roles both in reality and in literature. These classes were considered superior in everyday life, and this ideology was reinforced in literature by depicting them as the centre of events.

Consequently, picaresque writers adopted a realistic approach to foreground the absurd unrealities in books of chivalry. Picaresque texts are stories that depict the traditions and customs of marginalized social groups or in using Spivak’s term “the subaltern.” Such texts narrate adventurous stories of the picaro and describe the ways in which he relates to his society. That is why these stories are primarily autobiographical, and they are written in either the first or third person. These voices are usually presented as satirical in the story, since they explicitly comment on hypocritical social values and traditions. Therefore, the picaresque novel is not only about reflecting the bitter reality of the lower classes, it is also an attempt to emancipate these marginalized categories from religious, social, political, cultural and even psychological constraints. The goal is to compete with, and even override, the guardians of social and political mobility that keep the “have-nots” away from the realm of literature.

Who is the Picaro?

Whilst the discussion in the preceding paragraphs was mainly concerned with the factors that were behind the birth of the picaresque novel, the following paragraphs will analyze the picaro’s character. Broadly speaking, the picaro is a model of a cautious and comic personality that lives an uncomfortable life. According to the Spanish academia, “he is an adventurous, marginalized, tramp, hustler, and beggar hero.” His only goal in life is to maintain a steady job so that he can feed himself and afford shelter to hide from the rainy cold nights. Protagonists such as Lazaro spend their time loitering absurdly from one market, street, and city to another. The hero, in this context, is a rogue person “who, bereft of parental assistance and driven by necessity, must seek his fortune in a chaotic world serving under a number of corrupt masters.”

In the same vein, the picaro is usually portrayed as being alone and having no one to depend on, as his family is either absent or its existence is futile. However, he is not solitary in the sense of the tragic heroes. This loneliness of the picaro is reflected in the frequent passages that externalize the hero’s unspoken thoughts. In heroic literature, “[the heroes’] loneliness is a measure of their single-mindedness, of the organization of their emotion. The picaro, on the other hand, has no fixed emotional position towards anyone or anything.” The picaro’s loneliness should not be looked at as something negative, since it allows him to make his life bearable. The picaro does not care about his family, does not love, and does not tie his life to anything other than his personal survival; thus, his life becomes somewhat manageable. Hence, the picaro is a nomadic individual who does not give value to emotions; instead, the only thing that he cares about is his search for existence in the midst of absurdity.

The picaro, in his attempts to maintain his survival, plays tricks on people so that he can secure his fortune in the schizophrenic world where he lives. Lying and fooling people are among the recurrent fraudulent devices that he relies on. “In a culture of abundance one must either serve luxury or possess it.”  In classical literature, the lower class is inclined towards devilish behaviors like stealing, lying, deceiving, forgery and others. Nevertheless, the picaro has a tendency towards goodness; he is sometimes shown to be conscious of his immoral and impolite deeds. In this respect, Valentine Castellarin declares that “the picaro is not completely immoral as he is aware of his bad actions and he attempts to redeem his sins by repentance.” It is worth mentioning that the search for identity is one of the main traits that distinguish the picaro. During his “picaresque journey”, to use Miller’s phrase, the picaro attempts to fix his identity to anything concrete so that he can define it, but in vain. He loves order but since he lives in an unstable world he feels obliged to join the chaos.

Hence, the picaro is described as being an honest and faithful observer of his society through the eyes of the subaltern. Values and “reality” are reinterpreted from a deconstructionist perspective. Standards are inverted so that all that is believed to be good is blamed while the bad is praised. In brief, “this rogue (picaro) in life has been shown to be a product of the decadence. But in literature he was a vigorous protest against it.” Events in the picaro’s life are governed by the principle of suddenness, making his life seem uncontrollable. This suddenness in manifested in the way characters and incidents appear and disappear without warning, jumping from one situation to another. In this chaotic world, “anything can happen to anyone at any time.” The picaro’s life is not based on total causality; rather, it is conditioned by chance: “With such a dizzying rush of events, the picaro’s fortune see-saws with equal dizziness.”

In spite of this, the picaro is an enthusiastic person who never loses hope. He always thinks things may be better though he is continually frustrated. It is this exuberance and thirst for life that “furnishes the reason why the picaro never contemplates suicide, which is one alternative his chaotic world gives him.”

He has three main phases in his life. The first phase, childhood, is marked by the death of or separation from his parents. During this phase, the picaro learns that “he is one of the have-nots and that very few of his kind ever reach the status of the haves by following the rules of knighthood.” Under such conditions, he acquires fooling devices. The second phase is that of adolescence, when he works in the service of many different masters. The picaro expends a great deal of effort for the sake of satisfying his sexual whims, moving between bars and brothels. Finally, he reaches the stage of maturity and becomes independent.

Characteristics of the Picaresque Novel

Although the picaresque novel can be identified by many different features, this section sheds light only on the most important ones. At the structural level, this genre can be distinguished by its autobiographical form. Indeed, such stories are narrated in the first person, though the third person sometimes is used. However, “the first person speaker is preferred because it imparts an air of authenticity to the story and encourages the reader to identify sympathetically with the picaro.”

Nevertheless, the story does not follow a linear progression, since the events narrated by the main character are the product of a chaotic world governed by absurdity. As far as the content is concerned, the following themes are predominant and give an idea about the ideological issues that are associated with this genre:

– Delinquency and the denial of honor

– Adventurous trips that are replete with various surprises

– Insurgency, homelessness and the picaresque fraud

– The clash between moral and immoral values

– Braking with traditional canons and taboos

– Making reference to philosophies of the absurd and existentialism

To sum up, the picaresque novel reflects the hypocrisies and corruptions of society. It also offers the reader a clear image about people in humble walks of life. Picaresque writers tend to transcend the literary, cultural, and political challenges for the sake of out-voicing the concerns of the subaltern.

Part II will deal with the picaresque novel in Morocco, to be released soon