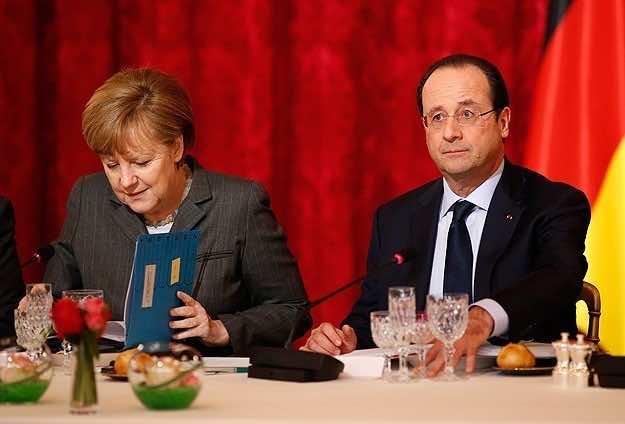 25 people, including nine police officers and one journalist, are reported dead in clashes between security forces and opposition groups in last two days in Kiev.

Hollande and Merkel held a joint press conference in Elysee Palace in Paris on Wednesday after the 16th France-Germany joint ministerial council.

The latest developments in Ukraine were discussed in details during the meeting, where Hollande and Merkel described the violent acts as ‘unacceptable’.

Two leaders called for sanctions against Kiev to be imposed during the EU Foreign Ministers’ meeting that is going to be held on Thursday in Brussels.

German President Joachim Gauck has condemned the excessive use of force against protestors in Ukraine and extended support for the pro-European demonstrations.

“This brutal use of deadly force against peaceful demonstrators…is unacceptable,” Gauck told reporters on Wednesday.

“We are on the side of those who are fighting for democracy and the rule of law,” Gauck stressed. “We Europeans will not allow fellow democrats to be left alone.”

Gauck said he welcomed the start of discussions among EU states on possible personal sanctions against Ukraine’s leadership.

Turkey expressed concern over the latest deadly clashes in Ukraine that killed at least 25 people in Kiev on Tuesday.

In a written statement released Wednesday, Turkey’s Ministry of Foreign Affairs called on all sides to quickly take steps to halt the ongoing violence.

“We believe that as a friendly nation in the region, Ukraine will overcome this crisis with its policy of peace and understanding and establish order”.

Turkey’s Foreign Minister Ahmet Davutoglu said, “Turkey is willing to do whatever it takes to build stability in Ukraine and help with the process.”

The violence that began on Tuesday continued through the night as police tried to clear entrenched protesters from central Kiev.